CHANDIGARH: A new trophy hunting picture circulating on Facebook has left the internet fuming. The viral picture shows a Canadian couple kissing while they pose with a lion that they just killed in South Africa. 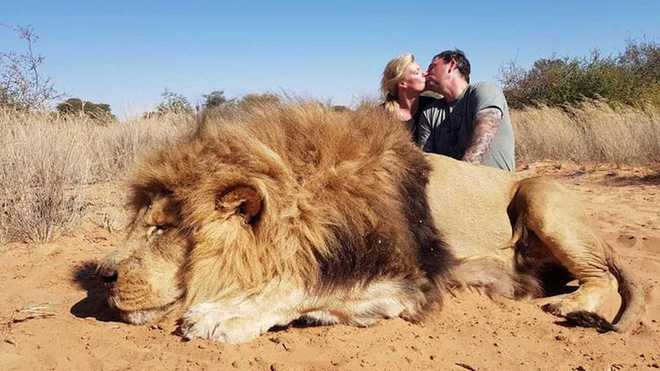 A new trophy hunting picture circulating on Facebook has left the internet fuming.

A new trophy hunting picture circulating on Facebook has left the internet fuming.

The viral picture shows a Canadian couple kissing while they pose with a lion that they just killed in South Africa.

The couple—Dareen and Carolyn Carter—belong to Edmonton in Alberta, Canada. The two were on a trip to South Africa, where they signed on with Legelela Safaris—a firm that offers trophy hunts for tourists.

According to a report by the Daily Mail, they charge just over $3,000 (over Rs 2 lakh) for the hunts.

The company often shares photos of happy customers posing with their quarry. The Carters' photo did not sit well with netizens, who soon began to call the couple and the company out for glorifying hunting.

"Hard work in the hot Kalahari sun... well done. A monster lion," read the Legelela Safari caption on the post. "There is nothing like hunting the king of the jungle in the sands of the Kalahari. Well done to the happy huntress and the team."

As the photos from the hunt circulated on social media, animal lovers and conservationists reacted with horror. Many denounced the practice of big game and trophy hunting.

The Carters, who run a taxidermy business when they are not on vacation, reportedly describe themselves as "passionate conservationists".

Darren Carter told reporters that they "aren’t interested in commenting on that at all. It’s too political".