CHANDIGARH:&ldquo;Amazingly, none of the culprits in these (sacrilege) incidents has so far been identified and brought to justice. 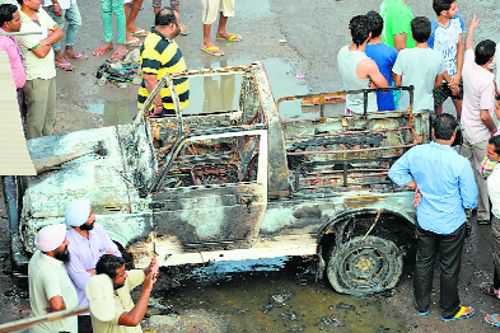 A damaged police vehicle during a protest against sacrilege incidents at Kotkapura. file photo

“Amazingly, none of the culprits in these (sacrilege) incidents has so far been identified and brought to justice. These incidents are clearly threatening hard earned peace of Punjab.”

This was Point IV of Congress manifesto in 2017, which had expressed “shock” at the incidents of disrespect to Guru Granth Sahib and had called to expose the “government’s hidden strategy”.

Now, after two-and-a-half-years of directionless investigation, contradictory stand and facing allegations of shielding of the Badals and the then DGP Sumedh Singh Saini, the issue has now started haunting Chief Minister Captain Amarinder Singh. And the biggest opposition is not from any political rival, but from his own party MLAs and ministers.

It all started on June 1, 2015, when Punjab witnessed a crime it never heard of before. A “bir” of Guru Granth Sahib went missing from gurdwara at Burj Jawahar Singh Wala village in Faridkot district. Four months later, some pages of the stolen “bir” were found scattered on the streets of the adjoining Bargari village. Soon, more such incidents were reported and it engulfed the entire state. People take to streets in large numbers and demanded justice for their “Guru”.

On October 14, 2015, a “completely unprovoked” police action killed two protesters at Behbal Kalan village. It gave a new turn to the whole story. The incident had taken place during the rule of the Shiromani Akali Dal (SAD), the “undisputed champions of the Sikh masses” at that time, but the scenario changed soon after that.

Following the then SAD-BJP government’s failure to act into the sacrilege cases, angry masses went all out against it. The matter came to such a pass that party leaders were sacred of being lynched by the masses for calling themselves Panthic. Almost all Akali leaders, including the Badals, were afraid of going out in the public.

The Congress pounced upon the issue and Amarinder stole the thunder from the SAD in its Bathinda rally in December 2015, when, with “Gutka Sahib” in hand, Capt Amarinder held Badals responsible for sacrilege and vowed to bring the culprits to book.

Within a month of coming to power, even before questions about the sacrilege probe and justice for Behbal Kalan were sought, the government constituted Justice Ranjit Singh Commission to probe the police firing incident.

The issue went a step further when the commission report was debated in the Vidhan Sabha for seven hours last year. The demand to take action against the Badals and the then DGP Saini and his police coterie was raised in unison. A resolution was passed to take back all cases from the CBI and an SIT was formed.

However, it came as a rude shock for everybody when the CBI filed a closure report in the court despite the cases having been “withdrawn” from it. The issue was allegedly messed-up further by a top police officer, who wrote to the CBI, seeking reinvestigation. The police later clarified that the circumstances forced them to write to the CBI to probe the case further, so that the closure report was not accepted in the court. But there seems to be no closure in sight.

Not just the Opposition, even the Congress MLAs put the Chief Minister in the dock for allegedly shielding the accused.

Day-after-day, the sacrilege issue is becoming Congress versus Congress affair, rather a moot point between the Congress and the Akalis. A bigger section of the MLAs and ministers feels that the issue should be taken to its logical conclusion as it is the only way to save the Congress from meeting the same fate as did the SAD.

The government has just reached the halfway mark, and half of its journey is still left. When the sacrilege issue has become a litmus test for Capt Amarinder Singh, there is a lot of wisdom in the words of a seasoned political commentator: “Once again Punjab is looking for a ‘bali’. Who will be the sacrificial goat, only the time will tell”.

June 1, 2015: A “bir” of Guru Granth Sahib goes missing from a gurdwara at Burj Jawahar Singh Wala village in Faridkot.

October 12: A few pages of the stolen “bir” were found scattered at the adjoining Bargari village.

October 14: The police firing kills two protesters at Behbal Kalan and injured some in Kotakapura.

August 29: After 7-hour debate in the Assembly, a resolution was passed to withdraw sacrilege cases from the CBI.

July 31: The CBI files closure report on sacrilege cases in a Mohali court.

Aug 26: The CBI files a plea intimating the court that further probe was being done so closure report shouldn’t be accepted.

The then SAD-BJP govt had, on November 2, 2015, handed over probe into three sacrilege cases registered at Baja Khana police station to the CBI.

After coming to power in 2017, the Cong formed Justice Ranjit Singh Commission to probe sacrilege and police firing cases. In June 2018, the govt formed a fresh SIT.