Itch that jumps out of the skin

Eczema is a general term for a wide range of skin symptoms. The word ‘eczema’ is derived from the Greek language in which ‘ek’ means ‘out’ and ‘zein’ means ‘to boil’. 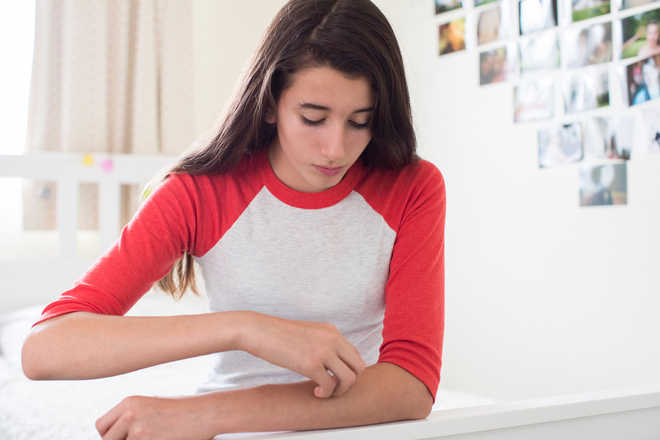 Eczema is a general term for a wide range of skin symptoms. The word ‘eczema’ is derived from the Greek language in which ‘ek’ means ‘out’ and ‘zein’ means ‘to boil’. So eczema could mean a variety of skin disorders in which the skin seems to be boiling out or boiling over. The equivalent medical terminology for eczema is ‘dermatitis’. Dermatitis means the inflammation of the skin. It is a reaction pattern with variable clinical presentations.

A number of skin diseases like atopic dermatitis, allergic contact dermatitis, irritant contact dermatitis, nummular eczema and seborrheic dermatitis are categorised under the heading of eczema or dermatitis. The atopic variety is seen in individuals who have a family history of allergic disorders like asthma, hay fever or dermatitis. Itching is the most prominent feature and many of the skin symptoms are secondary to the scratching and rubbing associated with the itching. That is why the atopic variety is called the ‘itch that rashes’ whereas usually in skin disorders, it is the rash that itches. The skin is inflamed, dry, scaly and may be ‘weeping’ or discharging. Crusts may form because of the discharge collecting and drying on the affected surface. The common areas of involvement are face, neck, folds of skin as in elbows, armpits and behind the knees. Children are usually affected.

Allergic contact dermatitis and irritant contact dermatitis are caused by chemicals or substances that injure or irritate the skin surface. These may be present in soaps, detergents, cosmetics, jewellery or even some plants and foodstuffs. The most commonly affected areas are the exposed surfaces like hands and arms. Ladies and industrial workers are quite prone to such dermatitis. Seborrheic dermatitis is another common variety that presents as oily, greasy scales over red patches. The most common location is the scalp where it is often mistaken as dandruff. It also affects eyebrows, eyelids, ears, armpits and central chest area. Itching and burning usually accompany the symptoms. Nummular eczema is characterised by small ‘coin like’ or oval eruptions that become crusty and scaly. The common areas where this type is found are trunk, arms, on the shinbone and back of hands.

Before the cure, the causes

Eczema is an allergic reaction of the body. The allergy may be due to any of the substances that one comes in contact with. The immunity of the body which is meant to protect the body from foreign harmful things starts overreacting to seemingly harmless things. This causes the skin to become inflamed, red and itchy.

For those who suffer from the allergic dermatitis and contact dermatitis varieties, it is important that they prevent exposure to such substances.

Homeopathic medicines are very effective in the treatment of eczema. The advantage of homeopathy is that it aims at eradicating the problem completely. It is not a short-term treatment. When you take homeopathy, it tries to correct the hyperactive immune system which is the actual cause of eczema. Once the immunity resets back to its original state and stops reacting hyperactively to the various stimuli, eczema is cured. Homeopathic medicines like Suphur, Graphites, Merc Sol, Petroleum, Hepar Sulphur are commonly used for the treatment of eczema. One should never resort to self medication.

(Dr Sharma is a Mohali-based homeopath)