JAMMU: Twenty-two persons were killed and 14 injured when a minibus fell into a gorge at Kela Morh near Marog on the Jammu-Srinagar national highway in Ramban district on Saturday. 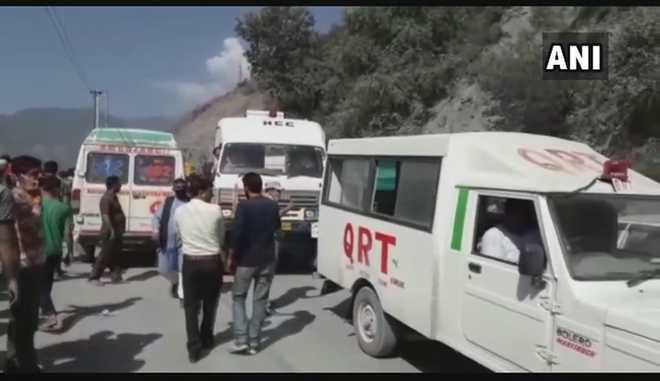 Twenty-two persons were killed and 14 injured when a minibus fell into a gorge at Kela Morh near Marog on the Jammu-Srinagar national highway in Ramban district on Saturday.

Thirteen critically injured passengers were airlifted to military hospital in Udhampur. Two of them died at the hospital. Three persons with minor injuries were discharged after first aid.

Doda-Kishtwar-Ramban Range DIG Rafiq-ul-Hassan said the minibus was on its way from Banihal to Ramban when it veered off the road around 9.55 am.

“Thirty-six persons, including the driver, were travelling in the 20-seater vehicle. The driver probably lost control over the overloaded minibus, which fell into the 200-metre gorge,” Hassan said.

The police, with the help of the Army and locals, immediately launched a rescue operation and shifted the injured to the district hospital in Ramban. “As many as 19 passengers died on the spot,” he said.

Most of the passengers were residents of Banihal and surrounding villages and were headed to Ramban. The rescue operation lasted for a few hours as it was difficult for the rescuers to reach down to shift the injured passengers and retrieve the bodies.

Accidents appear to have become a routine on the 30-km Ramban-Banihal stretch on the Jammu-Srinagar highway, said a villager, adding that thousands of lives had been lost on this link over the years and no action has been taken to address the problem.

Meanwhile, PM Narendra Modi has announced ex gratia of Rs 2 lakh to next of kin of the deceased.