At LoC, abandoned hamlet is now ‘museum of memories’

HUNDARMAN (KARGIL): A steep slope on the edge of Hundarman village, 16 km from Kargil town, leads to an abandoned settlement and opens a door to a “museum of memories” – the evidence of an extremely hard life lived by the people here. 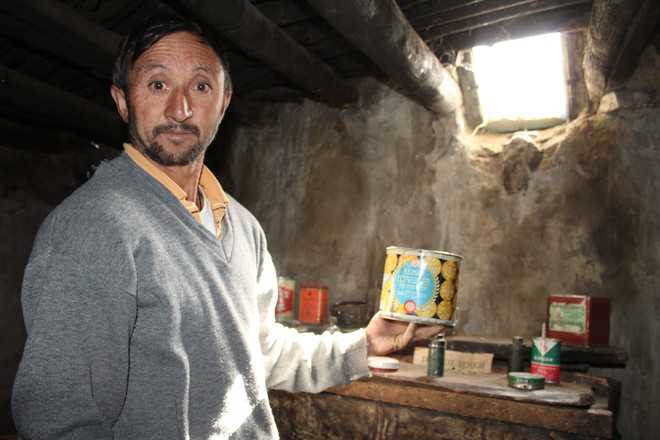 Caretaker Mohammad Baqir shows an artefact in the museum. Photo by writer

A steep slope on the edge of Hundarman village, 16 km from Kargil town, leads to an abandoned settlement and opens a door to a “museum of memories” – the evidence of an extremely hard life lived by the people here.

The settlement, located at the foot of a towering mountain, was once inhabited by herders who spoke Purgi and was part of Pakistan till the 1971 war. It is now being preserved as a rare museum in Kargil district. Glittering under the retreating autumnal sun, a frontline post of the Indian Army which guards the LoC is perched atop the mountain over the Hundarman settlement.

The museum housed inside the settlement is home to artefacts: coins, hunting arrows, weaving tools, utensils, remnants of past wars and an idea of a difficult life which has remained, mostly, unchanged.

“We started this museum two years ago,” said Mohammad Baqir, a local resident who serves as a curator in the museum. “This is a window to how our people lived, how their life was,” he said.

The Hundarman museum is the second museum set up by local initiative in Kargil, the district divided from the Kashmir valley by the majestic Himalayas and located nearly 200 km from Srinagar city and equally distant from the towns of Leh, Padum and Skardu. The other museum is in Kargil town.

Kargil’s equidistance from the main regional centres became a key factor in it being an important halt on the 6,437-km-long ancient Silk Route, a network of trade and cultural transmission for more than 15 centuries.

Baqir attends to curious tourists who come to Hundarman in search of the museum. “Some tourists return without seeing the museum because they get scared of walking the steep slope,” he said. Nearly 500 locals and tourists visited the museum this year, generating meagre revenue for the museum.

Hundarman is a village of goat herders and the abandoned settlement was the home of their ancestors. The settlement is made up of terraced and rudimentary huts, constructed with stones and mud and supported by logs of wood.

The architecture is suited to endure the harsh winter when the mercury drops down to 20 degrees below freezing point. “The frugal architecture,” a note written on an introductory placard says, “is a testament to the old ways and human ingenuity”.

There is no written history of the place but locals said the village was inhabited by their ancestors who came in search of pastures and abundant water for their cattle.

Muzummil Hussain Munshi, co-founder of Roots Collective – a non-governmental organisation which works on cultural documentation of Kargil, said the museum was founded during a workshop held by his organisation when they found rare artefacts in possession of the locals.

“It is a 500-year-old village which was also briefly in no-man’s land during war. The idea of making it a museum was conceptualised with the hope of giving a human touch to Kargil’s narrative,” he said.

Munshi, whose family runs the museum in Kargil town, said it was important to promote the cultural identity of the region which, he feared, had been “lost because of war”.

Zainab Bi, a wrinkle-faced 81-year-old woman who has seen Hundarman changing hands between Pakistan and India, said that “life was very difficult” in earlier times. “Going to market would take a day, we would spend the entire day if we had to buy anything from the market. But now everything moves so quickly,” she said.

Mohammmad Baqir, a local, attends to curious tourists who come to Hundarman in search of the museum. He says some tourists return without seeing the museum because they get scared of walking the steep slope. Nearly 500 locals and tourists visited the museum this year, generating meagre revenue for the museum