JAMMU: The Indian and Pakistani armies today held a battalion commander-level flag meeting at Chakan Da Bagh in Poonch to defuse tension at the Line of Control (LoC). 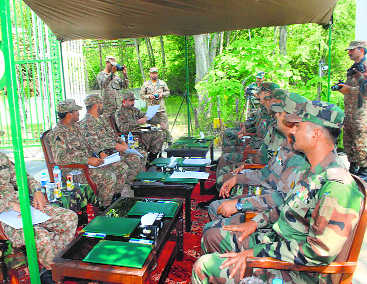 The Indian and Pakistani armies today held a battalion commander-level flag meeting at Chakan Da Bagh in Poonch to defuse tension at the Line of Control (LoC).

The meeting was held in the backdrop of ceasefire violations and casualties to civilians in the past several months.

The truce violations on the LoC have affected the cross-LoC bus service and trade. The firing even forced the Poonch administration to suspend the LoC bus service. The stranded tourists from Pakistan-occupied Kashmir were sent home via Muzaffarabad in Uri recently. The PoK residents were stranded here for three months.

The Public Relations Officer of the 16 Corps said the battalion commander-level flag meeting at Chakan Da Bagh in the Poonch sector started at 11 am today and lasted for 50 minutes.

“The meeting was held in the backdrop of numerous ceasefire violations and casualties to the civilian population in the past several months,” the PRO said.

“The Indian delegation highlighted abetment and support of the Pakistan army to cross-border terrorism, sniping actions on the LoC and deliberate targeting of civilians during ceasefire violations. The resumption of trade and transit through Chakan Da Bagh was also discussed,” he said.

“The meeting lasted for 50 minutes in a cordial atmosphere. Both sides mutually agreed to exercise restraint on the LoC and keep the channels of communication between the local commanders open. Both sides also agreed to institute mechanisms to ensure durable peace and tranquillity along the LoC,” the PRO said.

The meeting is expected to pave the way for resumption of the cross-LoC trade and bus service through the Poonch-Rawlakote route.