SRINAGAR: Char Chinari (four chinars), also known as Rupa Lank, an island inside the Dal Lake, is dying slowly as its famed four chinars are a history now. 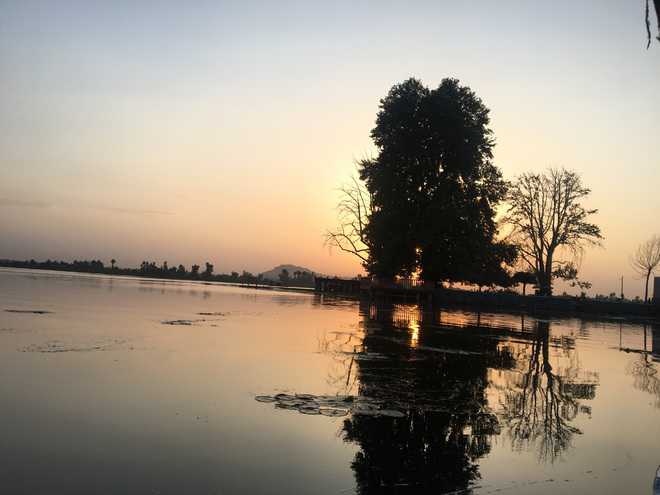 The Char Chinari during sunset. The garden was developed by Mughal emperors. Tribune photo

Char Chinari (four chinars), also known as Rupa Lank, an island inside the Dal Lake, is dying slowly as its famed four chinars are a history now.

The island, famous for its four majestic chinars on the four corners, is losing its sheen as three chinars have already dried up due to years of negligence.

“This used to be a soothing place for visitors. Tourists coming to Kashmir would make sure to go to this serene place but the government has not been able to preserve the old chinar trees. Three of these are already dead. There is only one big chinar now which is still green,” said Gulam Jeelani, 55, a shikarawala, who has been taking people to Char Chinari from the past 25 years. Jeelani says that the government could have grown new trees at the places of the dried ones but nothing had been done.

“The place is also not being maintained as there is waste and litter all around. The place is dead,” he adds. The Char Chinari garden was constructed during the Mughal era by Murad Baksh, brother of the Mughal emperor Aurangzeb. The garden in between the four chinars used to be the favourite place for visitors during peak summer to get a breathing space away from the noise of the city but due to its condition now, not many people prefer to visit it.

“Some people still come here but not with the same excitement. People who are visiting after decades here get disappointed on seeing its condition. This was a magical garden for us but we have not been able to preserve it,” says Shaheen Ahmad, 66, a resident of Nishat Srinagar who is associated with the tourism business.

For the locals, the leafless chinars are creating a gloomy view in the garden.

“It has lost its charm. The garden was famous because of the chinars and they are dying in it,” says Muzaffar Ahmad, a rickshaw driver at the Dal Lake. The Dal Lake houses two such Char Chinari islands, the second one is known as Sona Lank and is located in front of the Hazratbal shrine in Dargah. Chinar trees that usually grow in eastern Himalayas have been an important part of the Kashmiri tradition — a Chinar tree is found in almost every village in Kashmir. These trees have survived for ages because of their long life.