SRINAGAR: A day after seven civilians were killed in an explosion after a gunfight in Kulgam, life came to a grinding halt in the Kashmir valley in protest against the incident on Monday. 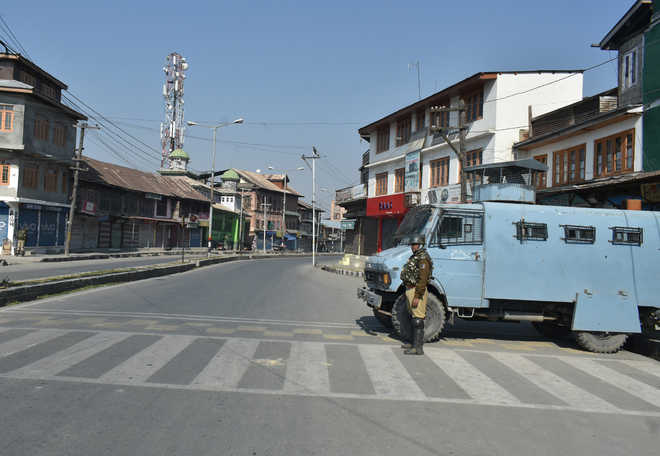 A security man stands guard on a deserted road during a daylong shutdown in Srinagar on Monday. Tribune Photo: Amin War

A day after seven civilians were killed in an explosion after a gunfight in Kulgam, life came to a grinding halt in the Kashmir valley in protest against the incident on Monday.

In Srinagar, all shops, business establishments, educational institutions and fuel stations remained closed. While the public transport was off the roads, a few private vehicles were seen plying in some parts of the city.

A large number of security forces personnel were deployed in the city to foil the protests over the deaths. There were, however, reports of clashes in some parts of the Valley, including Srinagar city, which left half a dozen protesters injured.

The strike also impacted the attendance in government offices and banks,an official said. The residents preferred remaining indoors. The train services from Baramulla to Banihal were also suspended due to the shutdown.

“Every family is mourning the killing of seven young men in the Kulgam tragedy and that is the reason for the unprecedented shutdown today,” said a Rajbagh resident, Aijaz Ahmed.

The call for the shutdown was given by the joint resistance leadership — Syed Ali Geelani, Mirwaiz Umar Farooq and Mohammad Yasin Malik. Seven civilians were killed on Sunday in an explosion at the encounter site in south Kashmir’s Kulgam. The civilian deaths triggered fresh tension in the Valley. The separatists have also called for a Lal Chowk march on Tuesday.

In Kulgam town, restrictions under Section 144 of the CrPC remained in place and the situation in adjoining districts was reported to be tense.

Protests were also held by the students of the Sher-e-Kashmir University of Agricultural Sciences and Technology of Jammu on the Sopore campus.

Showing solidarity with the Valley, Doda and Kishtwar on Monday observed a complete shutdown over the death of seven civilians in Kulgam on Sunday.

The shutdown affected normal life as most of the shops and business establishments remained closed in the twin districts. However, educational institutions and government offices were open in the area.

The majority community in Doda took out a protest march in the town.

Anjuman Islamia, Bhaderwah, chief, Parveez Sheikh, said, “The majority community observed a complete shutdown in Bhaderwah, Doda, and Kishtwar over the civilian killings in Kashmir. We want the Centre to shun this muscular policy in Kashmir and initiate a dialogue process.”

Mehboob Tak, a civil society member in Doda, said, “We want a peaceful atmosphere for our children as the development of our country is being hampered due to continuous disturbance in Kashmir. Our soldiers are being martyred on the borders regularly and innocent civilians are losing lives in Kashmir. This must be stopped.” “We want the government should initiate talks with Pakistan to resolve the differences,”  he added. — OC

Srinagar: A day after the death of seven civilians in a blast in Kulgam, the demand for ending bloodshed in Kashmir is growing. Condemning the deaths, PDP vice-president Abdul Rehman Veeri demanded an impartial probe into the incident. In a statement, he urged the Centre to initiate a dialogue so that further loss of lives could be stopped and peaceful atmosphere could be created. Leading a protest demonstration in north Kashmir’s  Handwara town on Monday, Independent MLA and Awami Ittehad Party leader Engineer Rasheed said the bloodshed in the region must end. “It is shameful that rather than taking permanent steps to resolve the Kashmir dispute, New Delhi and its proxies are busy in distorting the facts and accusing Kashmiris,” he said.