ANANTNAG: The All Party Migrants Coordination Committee (APMCC) — a body of migrant Kashmiri Pandits – on Sunday held a protest demonstration in Anantnag, urging Prime Minister Narendra Modi to fulfil his promise of starting the pilgrimage to Sharda Peeth temple in Pakistan-occupied Kashmir. 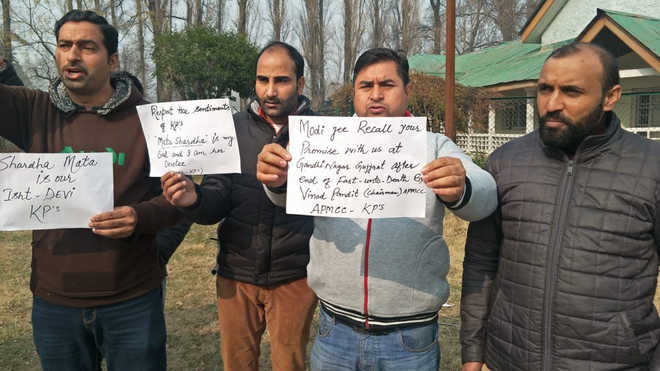 The All Party Migrants Coordination Committee (APMCC) — a body of migrant Kashmiri Pandits – on Sunday held a protest demonstration in Anantnag, urging Prime Minister Narendra Modi to fulfil his promise of starting the pilgrimage to Sharda Peeth temple in Pakistan-occupied Kashmir.

The demand to start the Sharda Peeth pilgrimage is growing louder with every passing day after the Kartarpur corridor to Guru Nanak Dev’s resting place was thrown open recently.

On Sunday, APMCC members assembled at the Dak Bungalow lawns in the main Anantnag town and held a peaceful protest.

The protesters said the PM had promised to get the yatra started while he was the Chief Minister of Gujarat in 2014.

“We held a hunger strike at Porbandar in Gujarat and it was Modi ji who made our chairman Vinod Pandita drink water after promising that he will get the yatra started,” said Ranjan Zutshi, an APMCC member.

He said the PM should now keep his promise and deliver. “Pakistan PM Imran Khan also wants the route to be opened. We demand that the Centre should take an initiative and get the yatra to our holy site started,” said another member Sunny Raina.

“It will be the best thing for both countries,” Mufti had said after meeting the members of the Kashmiri Pandit community, soon after the Kartarpur corridor was thrown open.