Pathankot: The trial in the rape and murder of an eight-year-old girl in Kathua began in the court of Pathankot District and Sessions Judge Dr Tejwinder Singh amid tight security arrangements on Thursday. 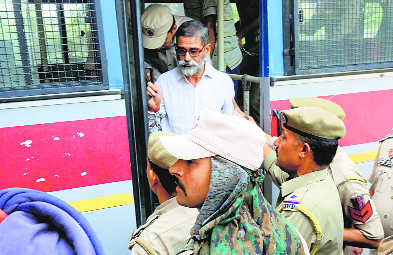 Sanji Ram, one of the main accused, arrives at the courts complex in Pathankot on Thursday. REUTERS

The trial in the rape and murder of an eight-year-old girl in Kathua began in the court of Pathankot District and Sessions Judge Dr Tejwinder Singh amid tight security arrangements on Thursday. The judge’s application for ‘Z’ security cover is reportedly being looked into by top police officers.

As many as 12 senior Pathankot police officers, led by SSP Vivek Sheel Soni, were present in the judicial complex, which houses the top court of the district, when seven out of the eight accused were produced in the court at 11.25 am.

Confusion prevails over the trial of the eighth accused — a juvenile. An officer claimed that the prosecution agency of the Jammu and Kashmir Police would approach the Supreme Court, seeking directions on where the trail should be held.

On Wednesday night, a marathon meeting was held by the SSP in the courts complex to discuss security arrangements.

The accused were brought from the Kathua jail by a bus with a vehicle escorting them. A Punjab Police escort vehicle was also pressed into service once the bus reached Madhopur on the outskirts of the city.

An eight-year-old Muslim girl, who was kidnapped on January 10, was allegedly raped in captivity in a village temple in Kathua district. She was sedated for several days before being bludgeoned to death. The body was recovered from a forest area on January 17.

On the directions of the Supreme Court, day-to-day in-camera trial is being held. The chargesheet was tabled before the judge. Around 12 relatives of the seven accused, including the daughter of the main accused, Sanji Ram, were also present inside the complex. There are 221 witnesses in the case. According to the chargesheet, the mastermind behind the rape and murder is a retired revenue official, Sanji Ram, his son Vishal Jangotra and his juvenile nephew.

Among the accused are Special Police Officers (SPOs) Deepak Khajuria and Surinder Verma. The others are Parvesh Kumar and Investigating Officer ASI Anand Dutta and Head Constable Tilak Raj. Dutta and Raj were arrested for trying to destroy the evidence. The chargesheet states that the girl was gang-raped thrice inside a prayer hall, adding that one of the rapists came all the way from Meerut to “satisfy his lust”. Before killing the girl, another police officer asked others to wait because he wanted to rape her “one last time”. The girl was then confined using sedatives, then strangled and hit on the head twice with a stone “in order to make sure” she was dead.