DODA: People living in the remote Dessa village of Doda district have been facing immense problems due to the recent snowfall, which has forced them to carry patients on makeshift stretchers to hospitals. 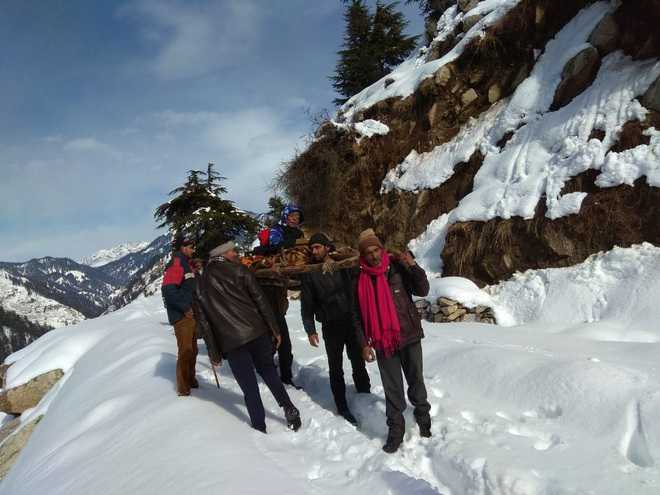 Villagers carry a patient on a makeshift stretcher in Doda.

People living in the remote Dessa village of Doda district have been facing immense problems due to the recent snowfall, which has forced them to carry patients on makeshift stretchers to hospitals.

Dessa is situated around 36 km from the district headquarters where most of the villages are yet to be connected with motorable roads.

A villager said, “There is no doctor or any health facility in the village. This has forced us to shift critically ill heart patients to the District Hospital on makeshift stretchers. The Doda-Dessa road is still closed as 7 to 8 feet of snow has been accumulated on it.”

“The police and Army have extended a helping hand in road clearance and other emergency issues, but no help has so far reached from elected representatives or civil administration in these areas. Nearly 20 patients are waiting to be shifted to a hospital,” a villager said.

Medical Superintendent, Doda, Dr Parveez Ahmed said, “Around 60 per cent patients at the hospital are from remote areas and are critical. Many of them are delivery cases, but we are dealing with them properly. We have a shortage of doctors as the newly recruited medicos have not yet joined their duties.”

Deputy Commissioner, Doda, Anshul Garg said, “I agree that people are facing health and other problems in remote areas due to the snowfall. We are trying our best as 50 JCB machines have been sent to different areas to clear the roads. Fresh landslides are creating hurdles in the smooth working of the administration.”

Additional Deputy Commissioner, Doda, Kishori Lal said, “In all, 46 houses have been damaged in Doda. There has been large-scale damage to electricity infrastructure, highways, link roads, agriculture and horticulture. We have also issued an advisory to 25 to 30 houses to shift from the hilltops for their safety.”