To save Mansar Lake, govt plans to relocate carp fish

JAMMU: The wildlife department is working on a plan to relocate carp fish from Mansar Lake, one of the biggest freshwater lake in the Shivalik mountains that is facing an unprecedented threat to its existence. 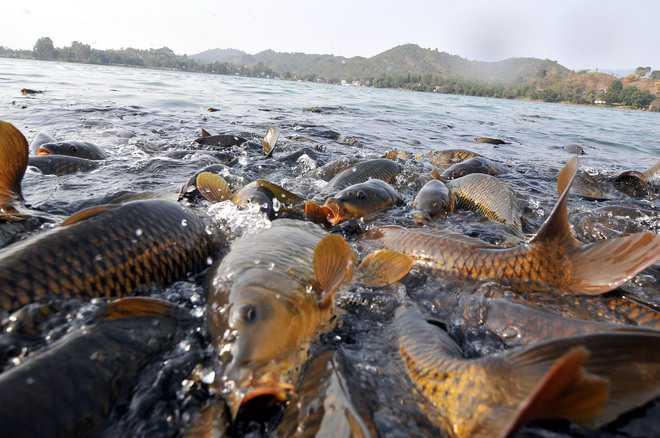 The wildlife department is working on a plan to relocate carp fish from Mansar Lake, one of the biggest freshwater lake in the Shivalik mountains that is facing an unprecedented threat to its existence.

Carp fish, not native to the lake, was introduced about two decades back after thousands of indigenous freshwater species died due to a mysterious disease. As fishing is prohibited due to religious reasons, the number of fish has increased to an alarming level beyond the capacity of the water body to sustain the aquatic life.

Villagers have great reverence for the water body considered as the abode of Shehsnag, a mythical creature mentioned in the ancient Hindu texts.

Sources said the wildlife department was looking for alternative sites, especially dams and ponds, to relocate the fish to ease pressure. Experts have expressed concerns that the alien species had proved nemesis to the native aquatic life.

“We are working on a plan to shift the fish. A detailed scientific study is being conducted. Locals will also be taken into confidence before anything is planned,” said Neeraj Badu, wildlife officer, Mansar.

The lake, at the elevation of 600 m in Samba district, nearly 60 km from Jammu, is already under pressure due to human intervention and uncontrolled influx of sewage and chemical pollutants in the water, slowly killingthe Ramsar-listed site.

However, environmentalists have raised doubts about the success of the project. “The big question is that where will they shift the fish. The villagers have great reverence for the aquatic life and there is no guarantee they are not killed for consumption at other places. The real culprits are those who introduced the alien species to the lake, leading to the present mess,” said Bushan Parimoo, an environmentalist.

Around 1,000 people live in the area falling under Chani Mansar panchayat and in the recent years, it has become a favourite destination for the tourists, both domestic and from outside the state.

“The lake water has become unsuitable for drinking. Locals too want that the government should take measures to save the water body. The problems started the day carp fish was brought to the lake,” said Ajay Badyal, a local.