JAMMU: Against the backof prevailing uncertainty and sensitivities post revocation of state’s special status, the National Highway Authority of India (NHAI) has ignored the concerns of local stakeholders while “unilaterally” setting up a new toll plaza in the Sarore area of Samba district. 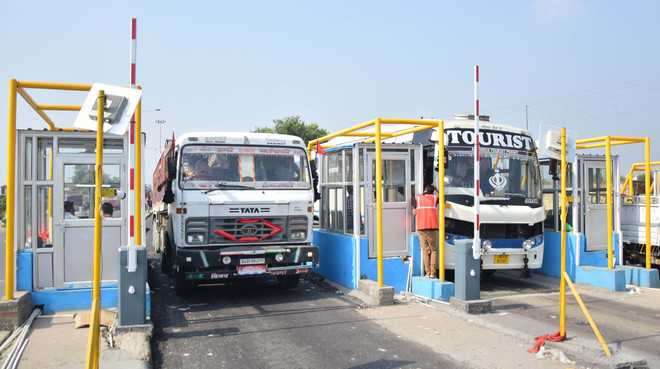 Against the backdrop of prevailing uncertainty and sensitivities post revocation of state’s special status, the National Highway Authority of India (NHAI) has ignored the concerns of local stakeholders while “unilaterally” setting up a new toll plaza in the Sarore area of Samba district.

The issue has snowballed into a major controversy with transporters deciding to call for a statewide “chakka jam” against the decision tomorrow (Thursday) and the opposition parties upping in arms against the ruling BJP for converting “Jammu — a city of temples — into a city of toll plazas”.

Industrialists and traders, too, are concerned about the region’s economy which has been in a “worst contraction” for the past over two months and will further slow down the growth with the addition of toll plazas on the highway.

The controversy has put the BJP on the back foot, which, after widespread criticism, has written to the Union Transport, Roads and Highways Minister Nitin Gadkari for immediate scrapping of the Sarore toll plaza.

“The J&K industry has already been passing through critical times. Instead of taking steps to revive the growth of industrial sector, the government is bent on pushing industrialists to the wall. The new toll plaza will have a direct impact on the growth of industry. The cost of production will go up and the common man, in turn, will finally bear the brunt of it,” Annil Suri, one of the leading industrialists in Jammu, said.

Neeraj Anand, president, Chamber of Traders Federation (CTF), Jammu, described the decision as “ill-timed”, which was taken in haste without taking local stakeholders into confidence. “Nobody is against the revenue generation of the government but the new toll plaza at Sarore has been set up at wrong time and in hush-hush manner. The government should immediate defer this move as J&K is in a transition phase from state to a UT,” Anand said.

Harsh Dev Singh, Panthers Party chairman, said, “It’s traumatic to see that Jammu, which has come to be known as ‘City of Temples’ is being converted into ‘City of Toll Plazas’ by the BJP for a malevolent cause. While the Lakhanpur, Ban and Chenani-Nashri toll plazas are already functional, the installation of a toll plaza at Sarore site, less than 40 km from Ban, has not only violated the norms of the NHAI, but also subjected local population and pilgrims to further loot and extortion.”

TS Wazir, Chairman All J&K Transport Welfare Associations, Jammu, said they had been forced to call for a statewide “chakka jam” tomorrow against the toll plaza at Sarore, 9 per cent one-time road tax on the purchase of new vehicles and implementation of stringent NGT laws here. “The transport industry is in complete disarray and the recent decisions of the government have put final nail in the coffin,” Wazir said.