JAMMU: The J&K Assembly today witnessed uproar over the alleged rape and murder of a minor girl from a tribal community in Kathua district with the Opposition, including National Conference and Congress, staging a walkout from the House. 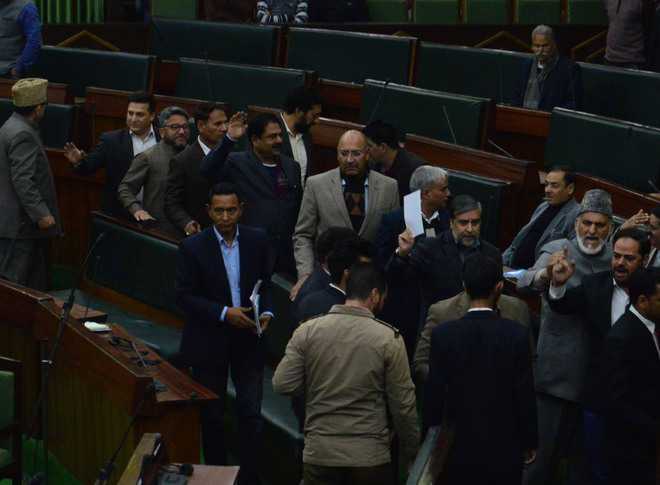 Opposition MLAs stage a walkout over the alleged rape and murder of minor girl from the Legislative Assembly in Jammu on Thursday. Tribune Photo: Inderjeet Singh

The J&K Assembly today witnessed uproar over the alleged rape and murder of a minor girl from a tribal community in Kathua district with the Opposition, including National Conference and Congress, staging a walkout from the House.

The agitating members while demanding a high-level probe into the incident sought the suspension of the Station House Officer (SHO) and Deputy Superintendent of Police (DSP) concerned for their “casual” approach to deal with the “sensitive” and “serious” issue.

The government, meanwhile, informed the House that a special investigation team (SIT), headed by a Sub-Divisional Police Officer-level officer, had been constituted to investigate the matter.

As soon as proceedings of the House began, Congress and NC legislators stood up to protest the alleged rape and murder of an eight-year-old girl from the Bakerwal community of Rasana village in Hiranagar subdivision.

The body of the victim, who had allegedly gone missing from her house under mysterious circumstances on January 8, was recovered from the forest area in Hiranagar.

Senior NC legislators Mian Altaf and Mubarak Gul raised the issue and asked the government to come out with a statement, alleging that the police did not make “serious efforts” to trace the girl after she went missing.

Congress MLAs Vikar Rasool and Ghulam Mohammad Saroori also stood up from their seats, alleging that “minorities were not safe” in Kathua.

“The police did nothing during last one week and the body of the minor girl was recovered from the forest yesterday. The residents of the area were very angry and had blocked the highway yesterday. This government has been making loud slogans of ‘Beti Bachao, Beti Padhao’ but where is the safety for girls?” Rasool yelled while seeking a reply from the government.

Saroori asked why didn’t the government take any action for a week. “What were you doing? Give us a report in 24 hours,” Saroori said, demanding immediate suspension of the SHO and DSP concerned for their “casual approach”.

“An FIR under Section 360 of the RPC was registered and a lookout notice was issued; On January 17, the body of the minor was found around 10:30 am in the forest area which led to protests by the Bakerwal community,” he said, adding “A SIT headed by the SDPO (border) has been constituted for speedy investigation and whosoever involved in the crime will be punished under law”.

Dissatisfied with the minister’s reply, the opposition members staged a walkout while demanding a time-bound probe into the incident.

Guilty to be punished, says Mehbooba

18 hours ago
8
Punjab On The Sidelines