BENGALURU/NEW DELHI/MUMBAI:The tottering Congress-JDS government in Karnataka led by HD Kumaraswamy will face the floor test in the Assembly on July 18, which would end suspense over the numbers game triggered by a raft of resignations by the ruling coalition lawmakers. 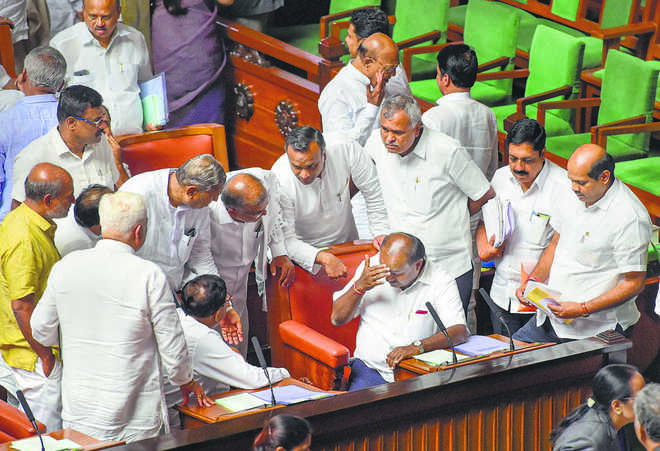 Karnataka CM HD Kumaraswamy and his deputy G Parameshwara with other members in Bengaluru. PTI

The tottering Congress-JDS government in Karnataka led by HD Kumaraswamy will face the floor test in the Assembly on July 18, which would end suspense over the numbers game triggered by a raft of resignations by the ruling coalition lawmakers.

As the political turmoil lingered on with the ruling coalition making frenetic efforts to win back rebels who have pushed it to the brink of collapse, Assembly Speaker KR Ramesh Kumar today announced the confidence motion sought to be moved by Kumaraswamy would be taken up at 11 am on July 18.

The date has been fixed after consulting both the Opposition and ruling coalition leaders at the Business Advisory Commitee (BAC) meeting, Kumar said in the Assembly and adjourned it till Thursday as demanded by the BJP.

BJP maintained the government had been reduced to “a minority” with the 16 coalition MLAs resigning their Assembly membership and hence opposed conduct of House business till the trust vote.

Kumaraswamy continued to remain confident his government would get over the crisis. “I have full confidence...why do you worry,” he told reporters.

Senior Congress legislators said they have got more time to continue their efforts to mollify the rebel MLAs.

Keeping up pressure on the Speaker and government, BJP also sought to move a no-confidence motion against the over 13-month old Kumaraswamy ministry with its members JC Madhu Swamy, KG Bopaiah and CM Udasi submitting a notice, but later agreed to the trust vote schedule.

“... as already he (CM) has submitted the motion and has expressed the intention (to seek trust vote), so we will take it up first. Opposition leaders said they have no objection and things can go as suggested, the Speaker said.

As many as 16 MLAs — 13 from the Congress and three from JD(S) — resigned on July 6, while two independent MLAs S Shankar and H Nagesh later withdrew their support to the government.

The disgruntled MLAs are hunkered down in Mumbai and have not turned up for the Assembly proceedings. They have written to the Mumbai police chief, saying they don’t want to meet senior Congress leader Mallikarjun Kharge or any other Congress leader.

They said they feel threatened, and requested the police to stop any Congress leader from meeting them. — PTI