Kashmir may witness many Handwaras

A dangerous situation is unfolding in Kashmir and it appears a deliberate attempt to up the ante. 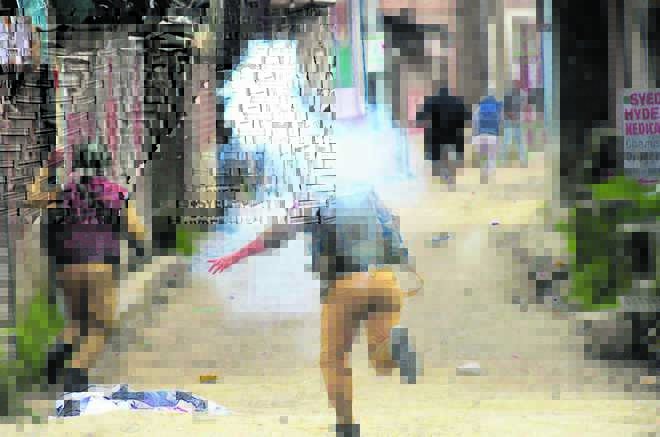 Police acts against the members of Tehreek-e-Hurriyat who were taking out a protest march against the killing of four persons in Handwara, in Srinagar. There is an influential element within the separatists that is instigating an irrational approach. PTI

A dangerous situation is unfolding in Kashmir and it appears a deliberate attempt to up the ante. It was predictable to any one who observes the Jammu and Kashmir situation on a regular basis. South Kashmir was far too volatile and the north far too quiet over the last few months. The conditions were ideal for a return to the street turbulence witnessed during 2008-10. Sopore, Handwara, Baramula and Pattan are competing centres for attention. Bandipura too has been without political or terrorist activity for some time. All of them have distinct separatist bases with a large cadre of over ground workers (OGWs). Terrorist strength has dwindled due to an effective anti-infiltration grid and effort of the security forces in the hinterland. Separatists cannot afford to allow their movement to flag off beyond a certain threshold and the youth-based militancy in south Kashmir is increasingly out of control of the United Jehad Council with whom the separatists have a good working linkage. The stamina of the public for another round of street turbulence has resurged. This was evident from the manner in which mobs attempted to intervene in the operations of the Army's Victor Force in south Kashmir and turned out to pay tribute to dead terrorists. The local media has largely been eulogising the terrorists in south Kashmir, with pro- separatist commentaries. The return of a government also triggered the idea of agitation.

With Governor's rule an agitation loses its political effect and the response by the state is far more robust. With an elected government in place the situation helps to create hype; response comes under scrutiny and with a coalition government dissensions increase on how to handle the turbulence Separatists create situations in which the security forces are offered few options but to respond. Recall how the Muzaffarabad March of August 11, 2011, was set up and Sheikh Abdul Aziz was virtually led to his death through a conspiracy. His death is still believed to have been at the hands of terrorists concealed in the mob. The manner in which the recent Handwara incident panned out was typical of a deep-set conspiracy to bait the Army. The targeting and burning of the bunker was done deliberately to invite response. The Army could not have had a benign response as the safety of its men was involved.

The attention of the Army will shift to internal security and the terrorists and their handlers will hope that the anti-infiltration grid will be less focused allowing more terrorists to infiltrate, leaders to be brought in and the critical supply of arms and ammunition replenished. Separatists want India and Pakistan to talk but perceive that their own role is being marginalised, hence the necessity to project their relevance. Street power is considered an appropriate means to draw attention. If the India-Pakistan peace process does progress, the importance of Handwara- like situations will enhance  — with separatists constantly seeking their space.

The spiralling violence is a part of the overall plan of action and reaction. Cadres are usually on the ready for this and professional rabble-rousers move from town to town, with teams of stone throwers. The Baramula agitation, for example, is almost entirely instigated from Sopore and carried out by the Pattan youth. The Army has the experience to handle this although many of the officers and jawans may be new to this game due to turnovers. However, there is an institutional memory and the JK police will help in briefing them on past responses. The Army must keep itself out of the agitation as in the past, notwithstanding deliberate attempts this time to bait it. This is not a conventional internal security situation. Remember, the Army is on a counter-terrorism grid. Flag marches will have to be dispensed with as this brings the mobs in contact with soldiers. The CRPF and JK police have enough experience but must ensure that a repeat of 2010 is avoided at all cost. The optimum amount of anti-riot gear is learnt to be still eluding these forces for which responsibility must be fixed. Senior police officers have to ensure that their sub units are never too small to get isolated and, therefore, targeted.

My personal experience tells me that the clergy plays a crucial role in subsiding tempers. The Amir e Jamat of the Jamat e Islami (K), who is located at Kulgam in south Kashmir can play a positive role. In such mass agitation, a sane voice will help and his services must be requested. If need be, SAS Geelani and his ilk should be physically isolated and prevented from accessing any communication resources such as mobile phones. His bandh calls had reached a point where no one was responding to them. Obviously Handwara is a method to regain his lost space.

All the above is well said and is fine as an approach towards prevention of a negative situation followed by avoiding worsening if it occurs. However, there is an element within the separatists and a very influential one which is instigating an irrational approach. It is catering for a conventional benign Army response of controlled use of violence.

The overall response of the security forces has been relatively benign, although some may term my usage of the word as an oxymoron. It's not easy to be facing mobs and attempting to be “good guys”. Before long, tempers will have flared.

In 2010, Geelani was initially ill- advised to increase the pitch of the agitation by targeting Army camps. When a veiled warning from the Army was received, he sensibly held back.

It seems this time the separatists have concluded that the Army will be benign and defensive so as not to draw the ire of human rights activists. Those promoting violence on the streets need to be aware of the phenomenon of unpredictability which the Army follows as an essential principle of security. In needling the Army, the separatists may just cross the threshold. It is their intent to sacrifice a few lives in the street to raise passions but beyond a point they too realise that loss of lives flags down a movement rather than take it forward.

There is a dire need for messaging at this time. The parents must know that their sons in the streets are being instigated. Even with best of intentions of the security forces, lives will be lost if a threshold is crossed. Is it difficult to get this message across? Perception management isn't the strongest area of any government establishment but this time sincere efforts must be made to shift blame squarely to the perpetrators who care least for young lives.

Some elements of the local media are attempting to egg on the new government to take a hard stance against the security forces. The Army Commander has made an early visit to ascertain and be briefed.

This is the time when the political leadership and the Army need to be demonstratively on the same page. Separatists and elements of the negative media will paint perception of division of opinion and attempt to project the CM as anti-people. This must not allow the working to be dented. The Durbar is still at Jammu but an advance element of the government must move to the Valley to nip the happenings in the bud. If not, there will be no rest this summer in the salubrious environs of the pristine Valley.

The writer, an ex General Officer Commanding of the Srinagar based 15 Corps, is now a Fellow with Vivekanand International Foundation & Delhi Policy Group.