CHANDIGARH: There is no saving grace for the civic hazard that the Kharar flyover poses to daily commuters, as its functioning rests at the mercy of the district administration and the NHAI. 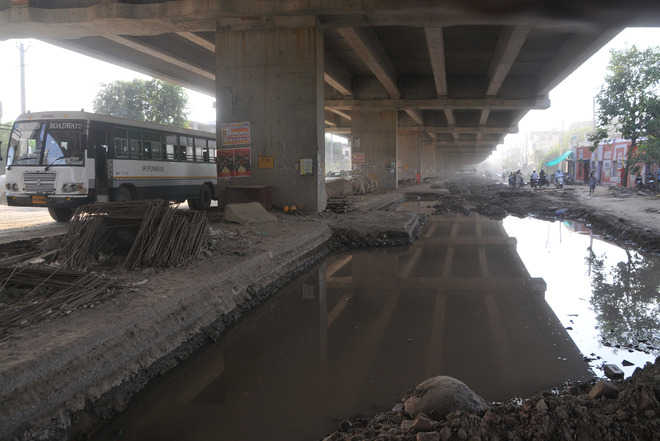 The waterlogged underpass of the Kharar-Mohali flyover after the recent rains. Tribune photo: Vicky

There is no saving grace for the civic hazard that the Kharar flyover poses to daily commuters, as its functioning rests at the mercy of the district administration and the NHAI. The one-year delay and callous administrative approach now reflects on the ambitious project’s economic infeasibility that continues to cause a monthly loss of Rs 1 crore to L&T, the company constructing it.

TB Singh, Project Director, L&T, said, “We were planning to pull out of the project, but are continuing with it for the sake of company’s goodwill. With more than 600 people working at the construction site and the constant delay, the company is suffering a loss of Rs 1 crore a month to make this flyover a reality.”

On Saturday, rainwater-logged pits at the underpass of the flyover made for a grim sight. The harrowing chock-a-block, slow-moving traffic on a single operational one-way road that accommodated outgoing and incoming vehicles made the approximately 10-km stretch under the flyover a painful one to cover, taking about an hour.

For daily commuters and residents living in the vicinity of the flyover the problem is worse. While the waterlogged site makes for a perfect breeding ground for mosquitoes, there is no traffic diversion, despite the orders of the Mohali DC.

Listing the main reasons for delay, TB Singh said, “There was a change of flyover’s location after awarding and fixing the contract date, due to local and political intervention. Inordinate delays in land acquisition and 550 built-ups (houses/shops) clearance eventually delayed all allied work and the main work. Also, we work over heavy traffic and there’s no alternative route to decongest traffic.”

“We had to make the flyover in nine fragments due to obstructions like built-ups, which is nearing completion,” he added.

About the nagging water stagnation, Singh shared that there was non-availability of existing drains. “A 220 KV high-tenion line crossing over the flyover approach at three locations is critical. We will take another year to complete the work.”

Krishan Lal, manager (technical), NHAI, shared, “During construction, water stagnation problem is there due to lack of cross-drainage and even rainwater from adjoining link roads comes on to the highway, aggravating the problem. Approximately 200 structures have still not been demolished although amount for the same has been deposited with the SDM’s office.”

He said initially, the district administration ordered for partial traffic diversion, but it could not be implemented due

to non-cooperation of general public, resulting in undue delay.