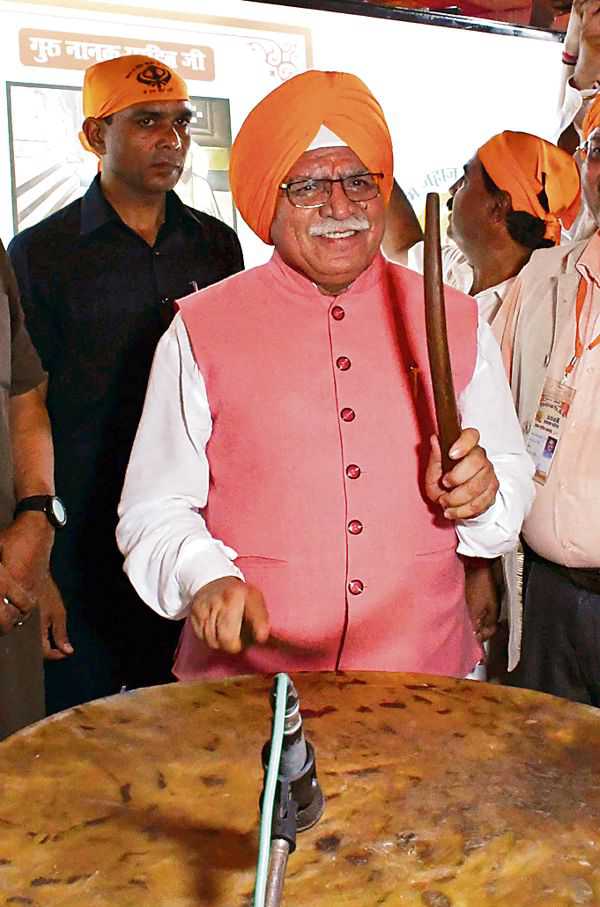 CM ML Khattar beats a ‘nagara’ at a gurdwara in Sirsa on Sunday.

Ahead of the Assembly polls, the BJP government today organised a huge gathering here to mark the 550th birth anniversary of Guru Nanak Dev. Though the event, organised by the Haryana Government, was religious in nature, its political message was not lost on those who attended it.

Chief Minister ML Khattar made a slew of announcements, including appointment of 400 Punjabi teachers in schools, a Sikh museum at Kurukshetra and a martial arts school to be named after Banda Bahadur at Lohgarh in Yamunanagar.

State BJP president Subhash Barala, lone Sikh BJP MLA Bakshish Singh and several Sikhs attended the event.  “Those who ruled the state in the past two decades looted state funds and the people whereas the BJP government has spent every paise on the welfare of the people and functioned as per the teachings of the Gurus,” Khattar claimed. The Sikhs comprise 4.9 per cent of Haryana’s population. They influence poll results in a dozen segments  in Sirsa, Fatehabad, Kaithal, Ambala, Kurukshetra, Yamunanagar and Karnal districts. Observers say, the BJP message was clear — that it has a considerable hold over the Sikhs in the state and may not

need the support of the SAD. No senior SAD leader was invited for the event. However, Balkaur Singh, SAD legislator from Kalanwali, Haryana, and Veer Bhan Mehta, vice-president of the SAD, were on the dais.