Khattar to sound poll bugle from Kalka on August 18

CHANDIGARH: Chief Minister Manohar Lal Khattar will kick off the election campaign for the October 2019 Assembly elections from Kalka on August 18. 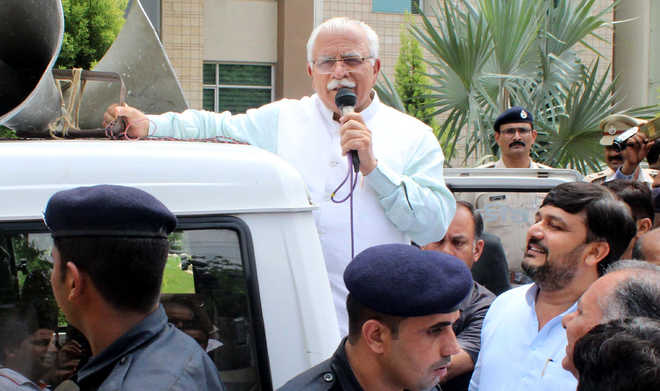 Chief Minister Manohar Lal Khattar will kick off the election campaign for the October 2019 Assembly elections from Kalka on August 18.

Former Chief Minister Bhupinder Singh will also organise his show of strength at Rohtak on August 18.The Hooda faction in the Congress has been demanding the removal of Haryana Congress chief Ashok Tanwar for quite some time.

Even as the other parties are yet to get their act together, the BJP has taken a lead and released the blueprint of Khattar’s “jan ashirwad yatra” which will start from Kalka and culminate at Rohtak on September 6. The yatra will be followed by a mega “vijay sankalp rally” in Rohtak on September 8, which is likely to be attended by Prime Minister Narendra Modi.

Media adviser to Chief Minister Rajiv Jain said: “We are going to mobilise our party workers in a major way even before the Election Commission announces the Assembly elections next month.” The jan ashirwad yatra has been planned in such a way that it will touch all 90 Assembly segments across the state.

After the BJP winning all 10 Lok Sabha seats in the recent parliamentary poll, the party wants to use the Chief Minister’s clean image to mobilise the electorate in the run-up to the assembly elections.

The party high command had already announced that the BJP would go to the Assembly polls under Khattar’s leadership in a bid to retain power in Haryana.

The yatra and rally in the Jatland Rohtak are part of the outreach programme of the party to woo the voters.