India has more than 6.3 crore Micro, Small and Medium Enterprises (MSMEs) and startups with a combined output exceeding Rs 30 lakh crore. However, the outstanding loans to MSMEs from 2013 to 2018 are rising at a compound rate of 19.6%. 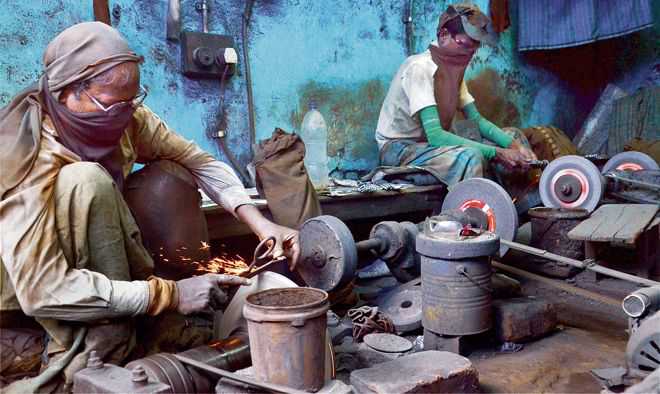 India has more than 6.3 crore Micro, Small and Medium Enterprises (MSMEs) and startups with a combined output exceeding Rs 30 lakh crore. However, the outstanding loans to MSMEs from 2013 to 2018 are rising at a compound rate of 19.6%. The Non-Performing Assets (NPAs) for MSMEs have increased to 9% in 2018 from 7.8% in 2013. As per one definition, NPA is a credit facility in respect of which the interest and/or instalment of principal has remained ‘overdue’ for a specified period. The growing NPAs indicate a rise in the status of the stressed assets of MSMEs, which would impact the profitability of MSMEs on the one hand and escalate the recovery risk in lenders on the other, resulting in low credit discipline in trade.

A persistent problem faced by MSMEs is that of cash flow, with scarcity in access to working capital being an overwhelming concern. Corporates tend to take a longer time to pay smaller organisations, forcing MSMEs to seek more working capital, which reflects as a strain on their profit margins. Another phenomenon on the rise is that of the bankruptcy of large companies, which tends to shake up the markets. When a large enterprise goes into liquidation, it takes with it many MSMEs, their only fault being of association. A few cases fresh in the memory are Jet Airlines, Kingfisher Airlines, Bhushan Steel, Lanco Infratech and ABG Shipyards. The government has come up with legislations to stem the rot by ensuring that habitual defaulters remain in fear of losing control of their company.

The Insolvency and Bankruptcy Code (IBC) is a single law for insolvency and bankruptcy in India. In vogue since 2016, it has shifted the balance of power from the debtor to the creditor. The IBC has a twofold purpose: to enable a free flow of credit in India and of instilling faith in investors for speedy disposal of their claims. In both activities, IBC has achieved a modest track record, with a few reverses like Essar Steel and Jaypee Infratech. The code recovered Rs 700 billion in 2019, twice the recovery in 2018. The recovery rate for the 94 cases resolved through IBC till the 2018-19 fiscal is 43%, compared with 26.5% through earlier mechanisms. It has proved to be successful in enabling lenders to recover their loans from defaulting companies. A few big-ticket successful resolutions are those of Binani Cement, Bhushan Steel and Monnet Ispat & Energy.

The IBC has created a regulatory and supervisory body, the Insolvency and Bankruptcy Board of India (IBBI), which has the overall responsibility to educate, effectively implement and operationalise the IBC. All proceedings under the code are undertaken by the National Company Law Tribunal (NCLT), which is a one-window forum for all aspects of insolvency resolution. No other court or tribunal can grant a stay against an action initiated before the NCLT.

The IBC provides creditors with a mechanism to initiate an insolvency resolution process when a debtor is unable to pay its debts. As elaborated by Nishith Desai Associates in their primer on IBC, the code specifies two types of creditors: (a) The financial creditor whose relationship with the debtor is a pure financial contract, where an amount has been provided to the debtor against the consideration of the time value of money; (b) The operational creditor who has provided goods or services to the debtor, including employees, central or state governments.

Impact of IBC on business

The Economic Survey tabled in Parliament on July 4 has brought out that small businesses which do not get their dues cleared on time from large business clients are making use of the IBC as a recovery tool. Since the IBC makes it a real possibility for owners of a defaulting firm to lose control of their enterprise once a creditor invokes bankruptcy proceedings, most corporate defaulters are paying off their debt even before the insolvency process can commence. Figures confirm the trend. As on February 28 this year, 6,079 cases involving an amount of Rs 2.8 trillion have been withdrawn before admission to the IBC as the defaulters decided to pay up rather than lose control of their company. Also, over Rs 500 billion has been received from banks from previously non-performing accounts.

Bankruptcy is a disagreeable word strongly associated with the stigma of failure. However, failure is often the stepping stone to success, a fact well appreciated by the Western society. Chapter 11 of the US Bankruptcy Code is a debtor-led model designed to offer a second chance to failing businesses and startups. RadioShack, a brand once known for do-it-yourself electronics retail, misread the markets as rivals like Apple and Amazon redefined expectations, transforming consumer behaviour, interests and expectations. It filed for Chapter 11 bankruptcy in 2015 and 2017, survived both times and is today a 10,000-employee company! The Indian IBC is a creditor-led model owing to a higher concentration of large banks as creditors. Unlike in Western countries, non-banking institutions and holders of capital market instruments hold a lower stake. Hence, the IBC model is practical but should be open to change when the composition of debt ownership becomes more broad-based with time. The Indian society is learning to accept failure, as evident from the considerations provided to MSMEs by the IBC, albeit in a subtle way. The options available can perhaps enable MSMEs to revive their sick assets and avail a second chance, where none existed a few years ago.

Many MSMEs providing products or services on credit to corporate entities often get into a stressed state when their payments become overdue by long periods. Such creditors, termed as operational creditors by IBC, can raise a demand notice on the corporate debtor for payment within 10 days of serving of the notice. On non-payment by the debtor, provided there are no pre-existing disputes, the operational creditor can apply to the NCLT for initiation of Corporate Insolvency Resolution Process (CIRP). If the application and other papers are in order, the NCLT can accept the application in up to 14 days. On such acceptance, the CIRP will commence, and the control of the debtor company will be taken over by a resolution professional appointed by the NCLT. The drastic shift of control can be unnerving to the board of the debtor firm and often results in speedy payment of dues. The application for initiation of CIRP by operational creditors is a simple four-step process, laid out in advisories by law companies, available on the Internet.

Buyback of assets by promoters

The IBC aims for the resolution of insolvency as opposed to liquidation, and Section 240A has been added to provide exclusive relaxation to MSMEs. For an MSME that has gone in for CIRP, its promoters will be allowed to buy back its assets, provided they are not willful defaulters. Given that the existing promoters may be the only ones willing to buy back assets in small and niche businesses, the provision enables a fair value of assets while selling off the enterprise as a going concern. Such a step works well for the MSME as liquidation would have got it negligible value for its assets.

However, there is a stumbling block. To avail the relaxation, a company should fit the definition of MSMEs laid down in the Micro, Small and Medium Enterprises Development (MSMED) Act, 2006. The act classifies MSMEs based on their investment in plant and machinery; for a medium enterprise, the threshold is up to Rs 10 crore, and for a small enterprise it is Rs 5 crore. Most MSMEs have investments above the threshold and hence are unable to take advantage of the relaxation in buyback provided to their promoters. There is a proposal before the government to change the criterion for defining MSMEs based on turnover rather than investment and to bring all entities with a turnover of up to Rs 75 crore under the Act.

In the pre-IBC era, insolvency resolution was a tedious process and dragged on for years. The IBC has the ‘Fast Track Insolvency Resolution Process’that applies exclusively to small companies, startups and unlisted companies having total assets not exceeding Rs 1 crore. From the initiation of insolvency until the approval of the resolution by the NCLT, the entire process gets completed in 90 days. However, the NCLT may, if enough cause exists, extend 90 days by a maximum of another 45 days. The provision enables an entrepreneur to obtain a clean and quick break from a failed venture and try to achieve success from his next venture.

Under Project Sashakt, an inter-creditor arrangement was signed by 35 banks on July 9, 2018, which provided a framework to resolve the stressed asset issue through a bank-led resolution approach. The project has a focused vertical for the management of stressed assets for priority resolution of SMEs with loans up to Rs 50 crore. If the banks are not able to provide a resolution plan in 90 days, the NCLT process would be put in place. The project has enabled MSMEs to obtain out-of-court settlements without having their operations affected.

Even after three years of its inception, the IBC remains a work in progress with doses of active feedback-based modifications. In order to uphold the spirit of facilitating a second chance to stressed MSMEs, the following recommendations are made. The author acknowledges the inputs provided by Anil Bhardwaj, Secretary General, Federation of Indian Micro, Small and Medium Enterprises.

(1) There is a need to classify all companies with a turnover of up to Rs 75 lakh as MSMEs in the MSMED Act. Such a step would be in line with global practices and will open up opportunities for MSMEs in the IBC.

(3) Considering the vulnerability and size of MSMEs, the IBC should provide out-of-court assistance to them in the form of mediation, debt counselling and financial education. A distressed assets fund, as recommended by a Reserve Bank of India panel, should be available at this stage to MSMEs in clusters which are facing a change in the external environment, such as a ban in the use of plastics or an acute scarcity of water resources.

For a typical MSME surviving in an environment of powerful debtors, the IBC can be the proverbial hand of God.

— The author is an Associate Director at the Indian School of Business, Mohali campus