The good, bad and ugly

The Green Revolution and the subsequent boom in the agricultural sector in the 1950’s and 60’s is a common knowledge but the after effects of it is limited to just a chapter of the school syllabus. 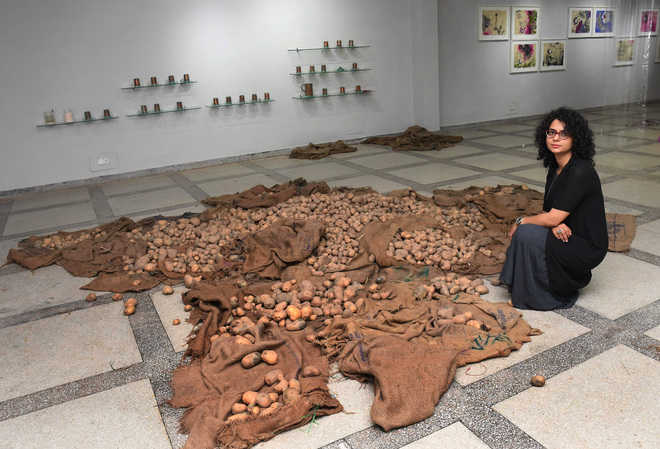 The Green Revolution and the subsequent boom in the agricultural sector in the 1950’s and 60’s is a common knowledge but the after effects of it is limited to just a chapter of the school syllabus. Manjot Kaur has pushed her artistic boundaries to communicate with the environment and in every installation, painting and animation of hers science speaks way louder than the art she is known for.

“It is not something that you will enjoy watching or something that imparts a feeling of catharsis,” she says, “this exhibition organised by the Punjab Lalit Kala Akademi is aimed to make you uncomfortable, be it through visual presentation or alarming sounds of Alta Aqua”.

Alta Aqua, sounds used to warn about flood tides in Venice, is incorporated only to draw a parallel between the disasters which will hit mankind sooner or later.

Manjot manages to update her art with the present scenario by adding neon colours to some paintings, which she calls drawings, not paintings by the way, with a corrupt subject as the nucleus of the drawing. A striking one out of many is a person spraying pesticides and fertilizers in a green field with a pink and blue colour etching of neuron system of human being lurking close to pesticide, indicating the ill effects of the process.

The other wall displays her prized possessions, the corals, which she collected during a short trip to Maldives but what she brought back from the fun trip were some disturbing images which she calls Zoom in Zoom Out, installed beside the corals. This one predicts the future of Maldives if the growing population and construction is not controlled. Manjot’s adventurous streaks are showed in her work where she jumps from one topic to other. She holds a serious dialogue with the current political situation through her paintings where she questions why bigger issues like rising population are not addressed but absurd things like religion are given priority in political discourses.