Have you ever had a drink in what was a prison earlier or watched a musical show and caught up with a Shakespeare rendition in a jail yard. 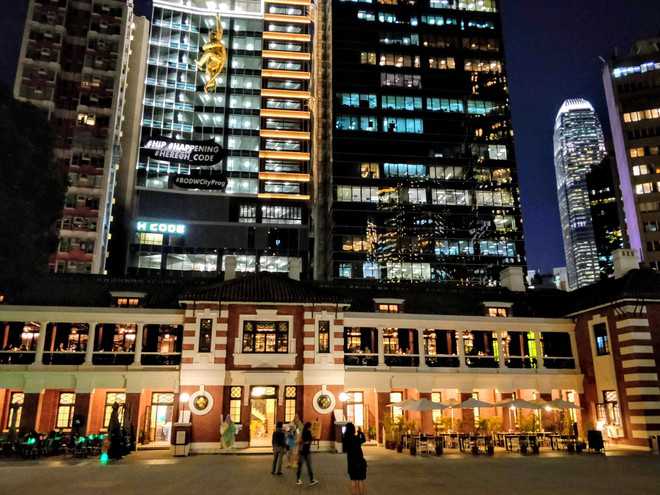 Have you ever had a drink in what was a prison earlier or watched a musical show and caught up with a Shakespeare rendition in a jail yard. The latest showpiece of Hong Kong, the city of skyscrapers and glitz, is Tai Kwun (meaning Great Station in Cantonese) located on a steep hill side in the city’s central business district — a clutch of 16 heritage buildings built between 1864 and 1925, which used to house the Central Police station, the Victoria Prison (where Ho Chi Minh was confined from 1931 to 1933) and the central magistrates’ court. Tai Kwun was where the Japanese army established a base during the Second World War and where later, war crimes trials were held.

The complex was in use in different forms till 2006 when it was decommissioned. It was then restored from 2010 over a period of eight years, at a whopping cost of $3.8 billion (HK) into a cultural hub with restaurants, shops, art galleries and boutiques and bars as well as a contemporary art museum. The restoration has paid attention to painstaking details with designers, artisans and builders working together — even 19th century bricks were sourced from England and tiles from Portugal.

Tai Kwun is arranged around two large courtyards: the Parade Ground and the Prison Yard. All separate spaces are linked by elegant walkways and concrete staircases. Two boxy, dramatic new buildings with mesh-like exteriors created out of recycled aluminum casing for car tyres that mimic the old bricks, peep over the old Victoria Prison walls and have been integrated seamlessly with the old buildings housing JC Contemporary — a contemporary art gallery and JC Cube — a 200-seat auditorium.

History echoes from every corner of the complex. You can take a tour of the old jail and its re-created cells with their steel doors, with video displays which make history come alive and showcase the life of the inmates. You can have your mug shot taken like a prisoner and walk the caged walkways.

The old prison yard with its high walls is now a venue for stand up comedies and concerts. There are many performance spaces carved out in the complex — like the laundry steps (where the actual prison laundry workshop used to be) leading to the open amphitheater where film screenings, theatre and music shows are held. There is a majestic mango tree in the parade ground that’s 60 years old and still continues to stand tall. In the past, people working here thought that if the tree was bearing lots of fruit one year, then there would be a lot of promotions that year! Don’t miss the colourful mural in a corridor that was uncovered during renovations at the entrance to the superintendent’s house.

The retail spaces in Tai Kwun have also been carefully chosen to represent local arts, craftsmanship, and architecture. Explore the exclusive boutiques on the ground floor selling gourmet tea, ceramics, clothes and books. Tai Kwun has also become a food lover’s paradise with some wonderful restaurants and bars. Have a drink at the otherworldly sea green and blue Art Nouveau inspired bar called Dragonfly, designed by Ashley Sutton. Sit under a dome of 120 stained glass lights, with motifs of dragonflies suspended from the ceiling and feast on a creative bar menu with drinks designed around four different cultures.

End the evening with a Cantonese dinner at Madame Fu with its wraparound verandah, furnished with velvet couches and ornate lanterns, occupies the entire third-floor of the Barracks block. The edgy restaurant is named after a fictional socialite who opened a grand salon in Shanghai in the 1930s. Its sleek design and colour palette has been inspired by the grand European cafes — have a peek at the seven themed rooms from a powder pink ladies room to a library room.

No visitor to the city should miss this restoration project — Tai Kwun, once a symbol of colonial oppression is today a spot of tranquility in the midst of the frenetic Central area where it is located — a rare urban space, packed with character.