LUDHIANA: Pranav Makkar is another upcoming player from Ludhiana city, making waves in the field of badminton. 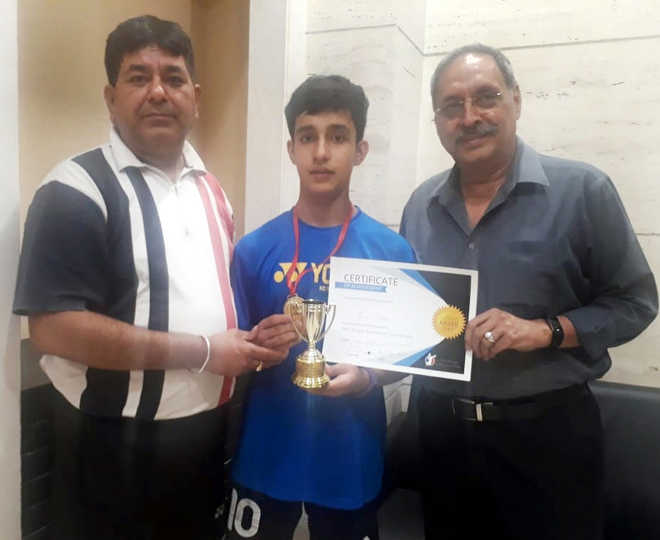 Pranav Makkar is another upcoming player from Ludhiana city, making waves in the field of badminton.

He carved a niche for himself when he came out triumphant in the Open Punjab Badminton Tournament organised by the Lord of Strings Club, Mohali, from June 22 to 24.

Earlier, Lakshay Sharma and Arnam Jain had proved their mettle, winning a number of titles in the sub-junior and cadet groups during the domestic as well as international competitions. The three are trainees of NIS qualified badminton coach Mangat Rai Sharma.

Pranav (13) wrapped up the title in the Under-15 category in this tournament, recognised by the Punjab Badminton Association, in which a large number of participants from Punjab, Chandigarh and Haryana besides other places shrugged their shoulders for top honours.

Pranav, a student of Class VIII at Sacred Heart Convent School, Sarabha Nagar, joined coaching under the supervision of Mangat Sharma about nine months ago and since then gave a good account of himself in all tournaments he played.

At Mohali, Pranav faced a little resistance from his opponents on his way to the knock-out stage. In the quarter final, Pranav proved too good for Vaibhav Tandon, also from Ludhiana.

In the semi-final, Pranav survived some anxious moments against Akshit Bansal of Bathinda before romping home victorious in three sets 15-10, 11-15 and 15-12 to advance into the final.

Prior to this tournament, Pranav won title in singles category (U-15) in the state-level tournament held from June 8 to 11 at Shaheed Bhagat Singh Badminton Academy, Nawanshahr. Pranav practices at the local Nirvana Club and follows coaching schedule of two hours daily. “I aspire to play for the country and win a medal in the Olympics,” he said.