LUDHIANA: Dasehra was celebrated at Om Parkash Bansal Memorial School with fervour. A special assembly was conducted in which students spoke on the significance of the festival. 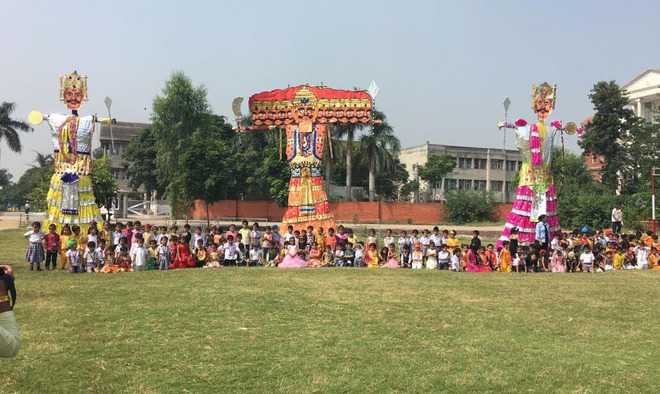 Ludhiana: Dasehra was celebrated at Om Parkash Bansal Memorial School with fervour. A special assembly was conducted in which students spoke on the significance of the festival. Tiny tots of pre-primary came dressed up as different characters of Ramlila. A cultural programme was held to mark the day.

Police DAV Public School celebrated Grandparents' Day with great pomp and show. Grandpas and grandmas of the kindergarteners were invited to the function. Children in their own special way thanked the grandparents for their love and support. They performed dance and sang songs. Several games for grandparents were also organised. A play on Ramayana was also presented.

Kundan Vidya Mandir (KVM) organised an exhibition themed Savishkara for students. The chief guest was Harpreet Kang, Dean International Affairs, PCTE, Ludhiana. The exhibition was divided into three zones. The first section 'Ramavtar Avlokana' depicting the different phrases of Lord Rama's life, brought the children closer to their roots and tradition. The second zone showcased 10 states of the country wherein their culture and heritage was presented. The third section displayed more than 100 working models on languages, science and community service among other topics.

St. Mahapragya's School, Jagraon, organised a programme themed 'From Assembly Greece'. The aim was to acquaint students with rich and varied culture of Greece. The celebration of greek festival 'Annunciation' left the audience spellbound. The tiny tots of Class IV presented themselves as great personalities of Greece in which they came in the get-up of Alexander the Great, Prime Minister Alexis Tripras and famous actress Angelique Rockas. Greek dance 'Zorba' enthralled the audience.— TNS