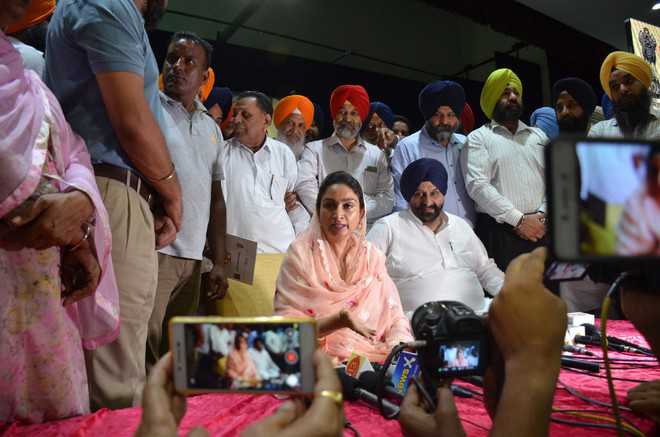 She said this during a session on the scheme here today. Farmers and industrialists were present at the event.

“Other state governments are creating awareness about the scheme, but I am not getting support from the Punjab Government. I am visiting 10 districts of Punjab to make farmers aware of the scheme,” Harsimrat said.

The minister claimed several projects under the scheme would generate more than 5 lakh jobs and benefit more than 10 lakh farmers. “The setting up of 42 mega food parks alone will lead to direct employment for 2.1 lakh people.” The Union Ministry of Food Processing Industries has issued an expression of interest for three schemes under the Pradhan Mantri Kisan Sampada Yojana — unit scheme, scheme for creation of infrastructure for agro processing clusters popularly known as cluster scheme, and scheme for backward and forward linkages. The last date for filing applications under the unit and cluster schemes is September 15 and that for the backward and forward linkages scheme is October 10.

The Union Ministry of Food Processing Industries will organise World Food India 2017 from November 3 to 5 in New Delhi. Union Minister Harsimrat Kaur Badal said the event would see participation from across the world. "Farmers will get a platform to showcase the strength of Indian agriculture," she said. The minister appealed to farmers and entrepreneurs involved in food processing, and those manufacturing machinery for food processing to participate in the event.