LUDHIANA: An inter-house talent hunt was organised at BCM School, Chandigarh Road, for the students of the middle wing. 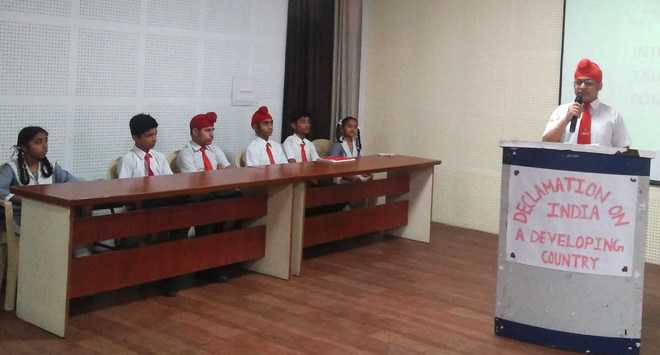 Students participate in a declamation contest at BCM School in Ludhiana on Wednesday. Tribune photo

Ludhiana: An inter-house talent hunt was organised  at BCM School, Chandigarh Road, for the students of the middle wing. Students showcased their talent in declamation, portrait-making, biography writing and singing competitions. In biography writing, Kritisha of Ravi house, in portrait-making, Bhawya of Yamuna house, in declamation, Lakshay of Satluj house, and in singing, students of Yamuna house bagged the first position. The principal congratulated the students and motivated them to adopt the spirit of healthy competition.

Police DAV Public School, Police Line, Civil Lines, performed a havan ceremony on the campus to seek the blessings of the Almighty. The havan was performed by Acharya Roshan Lal Arya. The principal, Dr Anu Verma, ignited the ‘havan kund’. She inspired the students to work with stern commitment and perseverance.

Blossoms Convent makes it to top

Ludhiana: Blossoms Convent School has always been known for its achievements academics and sports. At a school leadership summit held at Chandigarh, the school was enlisted in India’s top most schools. Principal Dr Amarjeet Kaur Naaz accepted the award shared her gratitude. She said the award was the result of collective efforts of the team of the school. She also thanked the parents for their faith in them.

Mahavir Jayanti was celebrated with great zest and zeal at USPC Jain Public School, Chandigarh Road, to mark the birth anniversary Lord Mahavira. A special religious assembly was conducted which commenced with the chanting of Navkar Mantra, followed by a speech on Lord Mahavir’s preachings.

Under the project of the British Council, the Class III students of BCM were sensitised regarding personal health and hygiene through a PowerPoint presentation at Mahatma Satyanand Munjal Activity Hall. The presentation highlighted the significance of good health and hygiene. Slides on comparative study of healthy eating habits and hygiene practices of different countries such as India, Japan and Nigeria were shown. Emphasis was also laid on the importance of cleanliness of our surroundings. TNS