Miraculous escape for five of family as car catches fire

LUDHIANA: Five members of a family had a miraculous escape as the car they were travelling in caught fire near Gate No. 2 of Punjab Agricultural University yesterday night. The family was on the way to pay obeisance at a gurdwara on the Ferozepur road. 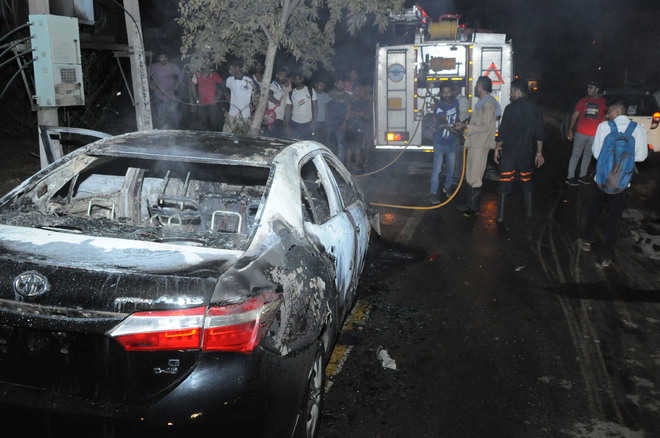 Firemen in action after fire engulfed a car near Gate No. 2 of the PAU in Ludhiana on Saturday night. Tribune photo

Five members of a family had a miraculous escape as the car they were travelling in caught fire near Gate No. 2 of Punjab Agricultural University yesterday night. The family was on the way to pay obeisance at a gurdwara on the Ferozepur road.

No one suffered any burn injuries in the mishap as they managed to get out of the car at the right time. Eyewitnesses said even a few seconds delay could have put their lives in danger.

The family even claimed that the fire brigade was immediately informed, but fire tender reached late at the spot due to which their car was completely gutted.

Baljit Singh, a resident of Damoria bridge, said he along with his wife, mother and daughter was heading to pay obeisance at a gurdwara and their driver was driving the car. When they reached on the PAU road, suddenly smoke started billowing from the engine, he added.

“After noticing smoke, we asked the driver to stop the car immediately and check the engine. As the driver went to check smoke suddenly fire erupted in the engine. We all then rushed out of the car and saved our lives,” Baljit recalled while narrating the incident.

As per fire officials, they got a call of car on fire at around 8.30 pm and in no time fire tender from the Haibowal fire station was rushed to the spot. When firemen reached the spot, car was engulfed in flames and they doused the fire, officials added. However, the car got completely damaged, they said.