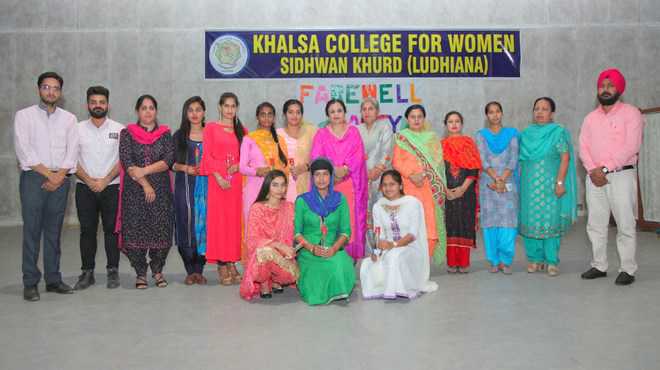 Students of Khalsa College for Women, Sidhwan Khurd, pose for a photo after the farewell. Tribune photo

Ludhiana: Khalsa College for Women, Sidhwan Khurd, bid farewell to the outgoing graduate and postgraduate batch. A ‘Sehaj Path’, followed by a kirtan in the college gurdwara was held. A cultural fiesta and games were also organised for the students. The principal, Prof Gurinder Kaur Sandhu, motivated the students to work hard and wished them success in their lives.

The Government College for Girls organised a farewell party, ‘Fiesta De Despedida’, for the undergraduate and postraduate classes. The function began with a welcome to the chief guest, Savita Rani Sharma, principal of GCG. She wished luck to the students for their future endeavours. Bhangra performance, group dances and fashion show grabbed the attention of the students.

Arya College bid adieu to final year students of BA and BCom with an event filled with activities such as dance, music and skit performaces. Students of final year also participated in a fashion show. From Bcom, Bhumika Sharma was crowned Ms Farewell and from BA, Harmanpreet was declared Ms farewell.

Sri Aurobindo College conducted a quiz on human resource management for the students of second semester. The quiz consisted of four rounds. It was organised under the guidance of Prof Meenu Goyal It helped students to develop organising and coordinating abilities. The first position was bagged by the team comprising Vridhi, Kavya and Ritika, followed by the trio Prabpal, Pushpinder and Bhavneet. Professor Meenu Goyal congratulated the winners and organising team in her vote of thanks. TNS

Ludhiana: A fresher’s party was organised at Blossoms Convent School. The students dressed smartly for the day. Udayjot Singh and Fateh Kaur were adjudged Mr and Miss Fresher, respectively. The principal, Amarjeet Kaur Naaz, said such programmes were organized frequently to boost the morale of the students. Manpreet Singh Brar, president of the school, congratulated the winners.

Police DAV Public School, Police Line, Civil Line, organised a special assembly to mark the birth anniversary of Mahatma Hansraj, founder of the school, on Friday. Students enacted a lyrical play in which they laid stress on the teachings of their founder. They also dedicated a singing performance to him. Besides this, the students recited poems highlighting the values possessed by the founder. The principal, Anu Verma, motivated the students to imbibe the values of sacrifice, hard work and patience in their personalities.

Students of the Bhartiya Vidya Mandir School, Kitchlu Nagar, organised an awareness programme to educate the society about dangers of drugs. Students formed a human chain to campaign against drug abuse. They also exhibited their social involvement and school spirit through posters, banners and hangings and condemned the use of drugs.  TNS