LUDHIANA: Villagers residing near the area where the Buddha Nullah merges into the Sutlej continue to suffer as the successive governments in the state have failed to check pollution in the nullah. 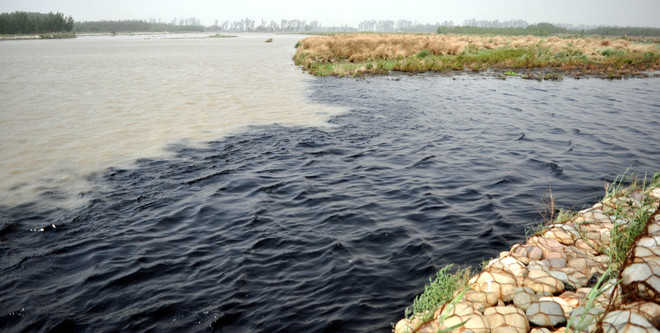 The contrasting shades of water of the Sutlej, black on the Walipur Kalan side and relatively clear on the other, visible at the place where Buddha Nullah merges into the river. Photo: Ashwani Dhiman

Villagers residing near the area where the Buddha Nullah merges into the Sutlej continue to suffer as the successive governments in the state have failed to check pollution in the nullah. The project, ‘Abatement of pollution in Buddha Nullah’, has failed to see the light of day for the past four years.

The villagers have blamed toxic water of the nullah for the spread of hepatitis and cancer in the area. They have said the successive governments and MCs have failed to act against industries and residential areas releasing chemical waste and untreated sewage into the nullah.

Two contrasting shades of water (black on the Ludhiana side and relatively clear on the other) are still visible near Walipur Kalan village where the nullah merges into the Sutlej. Residents of Walipur Kalan, Walipur Khurd, Talwandi Nau Abad, Kot Umra, Salempur and other villages have been demanding a check on pollution in the nullah for a long time, but to no avail.

Tankers of various factories are commonly seen releasing effluents into the nullah, a group of villagers said.

“Untreated chemical waste from industries, bio-medical waste and sewage have been released into the nullah for the past many years but nothing has been done to address the issue,” said Pritam Singh of the Jeevan Bachao Samaj Bachao, an NGO.

After failure of multiple projects, the state government (during the tenure of the SAD-BJP combine) had announced around four years ago that it would make the nullah pollution-free. The announcement came after a complaint was filed against the Punjab Government with the National Green Tribunal (NGT), New Delhi, that polluted water of the Sutlej was causing health problems in Rajasthan.

In 2014, representatives of the state government made multiple visits to the nullah. The government had then assigned work to a team of Engineers India Limited (EIL) to prepare a detailed project report to deal with pollution in the nullah. The Punjab Water Supply and Sewerage Board (PWSSB) was appointed the nodal agency for the project.

What the MP says

Member of Parliament (MP) Ravneet Singh Bittu said: “Industrial waste in Ludhiana will be treated at three common effluent treatment plants (CETP). Work at one of the plants has been inaugurated by Cabinet Minister Manpreet Singh Badal. Funds to resume work at other two CETPs were released last week. Besides, the treatment plants would be set up at both dairy complexes located on Tajpur Road and Haibowal. There is a need to upgrade the sewerage treatment plants. We require Rs 300 crore for treating sewage. Our efforts are on to arrange the required funds.”