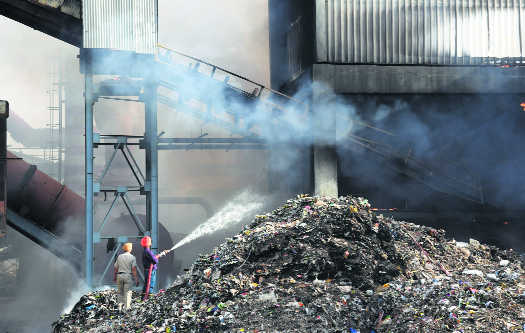 Firefighters douse flames after a fire broke out at the Jaypee garbage processing plant in Dadu Majra on Sunday. Pradeep Tewari

Though the Fire Department managed to control the fire in an hour, the damage was so immense that the management had to shut the plant.

Sources said the department had received a call regarding fire around 4.33 pm, which created panic among the employees at the plant. Five fire tenders were pressed into service to douse the flames.

NK Vohra, manager at the plant, said that the fire had burnt all belts that connected the machines. Besides, several other parts of the machines had also been damaged.

The main power supply cable from the substation to the plant has also been damaged.

Vohra said the management was assessing the loss, but it expected machines worth crores had been damaged. He said the plant could not be started till the replacement of machines was done. Cables, motors and gear boxes were damaged badly, he added.

Garg said the cause of fire was yet to be ascertained, while sources at the plant said short-circuit was the cause behind the incident, but the major reason would come out after an inquiry, they added.

Fire Dept to probe cause of fire

The Fire department will probe the cause of fire. Chief Fire officer Anil Kumar Garg said they would also probe whether the plant had fire-fighting equipment. If any shortcoming is found, action would be taken as per the law. Sources said when the fire occurred there were not much employees in the plant on account of the holiday.