ZIRAKPUR: The decomposed body of a man was found in a car here this evening. 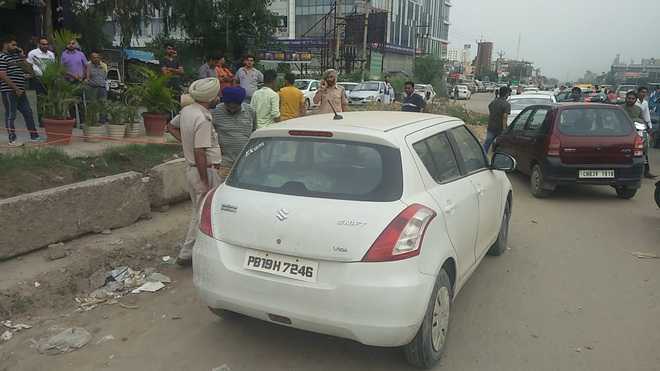 The body was found inside a Swift car that was parked on the Chandigarh-Ambala stretch near Zirakpur. Tribune Photo

The decomposed body of a man was found in a car here this evening. The Swift car of the victim, identified as Hardeep Singh, a resident of Barnala in Punjab, was found parked on the roadside in front of a shop. A passerby noticed a body lying in the car and informed the police. Cops came and smashed a windowpane to open a door of the car.

Gurcharan Singh, SHO, Zirakpur police station, said around 6 pm, he received a call that a car was lying abandoned on the Chandigarh-Ambala stretch near Zirakpur and a body was lying in it.

The SHO said the body was found lying on the driver’s seat. The car was locked and a liquor bottle and a bag containing some documents were found in the vehicle, which had been seized, he added.

“As per a preliminary report, there are no injury marks on the body to indicate strangulation or assault. However, the exact cause of death will be ascertained during the postmortem. The body was shifted to the mortuary at the Civil Hospital, Dera Bassi,” said the police.

The police suspect the victim died after inhaling poisonous gas as he was stuck in the car. However, they said they were awaiting the postmortem report.

Meanwhile, an investigation into the incident has been initiated at the Zirakpur police station. The autopsy would be conducted tomorrow.