KANGRA: Sacrifice of martyr Havlidar Zorawar Singh of Rait near Shahpur was remembered and tributes paid to him on the 156th birth anniversary of Swami Vivekananda. 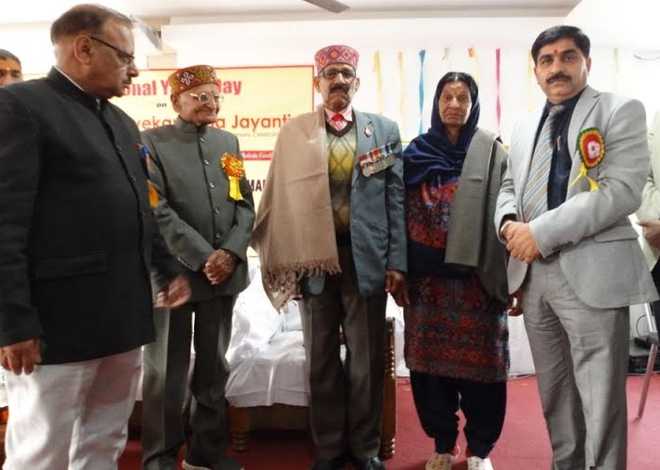 Sacrifice of martyr Havlidar Zorawar Singh of Rait near Shahpur was remembered and tributes paid to him on the 156th birth anniversary of Swami Vivekananda. On the occasion, Zorawar Singh’s parents were honoured on Saturday at Dronacharya College of Education at Rait.

Locals, intellectuals from Kangra and students attended the function in which parents of the martyr were honoured by the SSP, Kangra, Santosh Patial, the SDM, Shahpur, Jagan Thakur, and PR Agnihotri convenor of local branch of Vivekananda Kendra, Kanaya Kumari, and paid floral tributes to Zorawar Singh (43), who was killed in a fierce gunfight on the frontier of Kupwara district on March 21, 2018.

Subedar Rai Singh (retd), braveheart’s father, said he was blessed to have a son like Zorawar Singh. He said he fought three wars 1962 against China, 1965 against Pakistan and 1971 when Bangladesh was created. He said he was also a witness to the surrender of 97,000 Pakistan soldiers led by Gen Niazi. He said his son was inspired by him had joined the Indian army.

Zorwar Singh served for nine years in Jammu and Kashmir. For his dedicated service, he was given an extension of two years and posted in the 160- TA Battalion. Zorawar leading his platoon in Kupwara forests killed five militants, but only after two days, he was again assigned the job of combing the forest.He received seven bullets below his bullet-proof jacket and before attaining martyrdom shot the last militant dead. People gave standing ovation to the parents of the martyr.