Massive search in Ferozepur after intel on Pak terrorists

FEROZEPUR: Following specific intelligence inputs regarding the possibility of some Pakistani ultras hiding in this area, the Ferozepur police on Wednesday carried out a massive search operation in a “dhani” close to Mamdot block, 20 km from district headquarters. 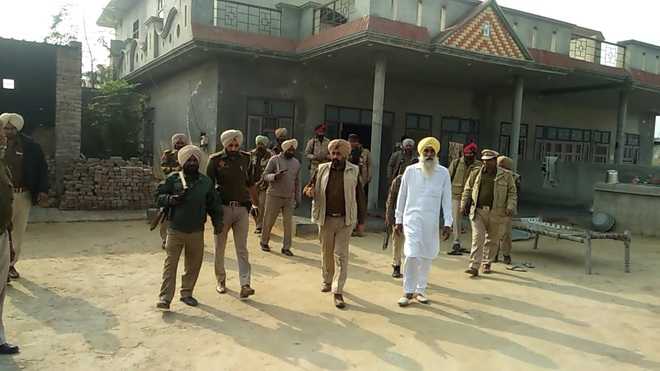 Police officials during a search operation in Ferozepur on Wednesday. Tribune photo

Following specific intelligence inputs regarding the possibility of some Pakistani ultras hiding in this area, the Ferozepur police on Wednesday carried out a massive search operation in a “dhani” close to Mamdot block, 20 km from district headquarters.

The police had tracked the location of a Pakistani SIM near Gulab Singh village, around 2 km from Mamdot. Sources said the search operation to ascertain the possibility of some Pakistani terrorists taking shelter in this area was launched on Tuesday night which was on during the filing of report.

The police have been searching each and every household, besides fields in this village. Ferozepur Range IG Mukhwinder Singh Chinna and SSP Pritam Singh are camping at the site to supervise the search operation. When contacted, the IG refused to divulge details.

Two weeks ago, the state DGP (Intelligence) had written a letter to field police officers here regarding the possibility of Jaish-e-Mohammed terrorists hiding in the Ferozepur area, following which the police and other paramilitary forces had launched a search operation at that time also. Sources said the police had rounded up some persons on suspicion. However, no terrorist has been nabbed till now.

Chinna said keeping in view the elections in Rajasthan, the police had sealed the inter-state border and round-the-clock supervision was being done. He said two additional companies had been deployed besides Quick Reaction Teams (QRTs) had also been asked to stay ready for any eventuality. Sources said military forces, too, had launched a similar search operation.