MEA no to Pak bizmen at Amritsar trade exhibition

AMRITSAR: The Ministry of External Affairs (MEA) has turned down the state government’s proposal of inviting Pakistan to Punjab International Trade Expo (PITEX) scheduled to be held in the holy city from December 6 to 10. 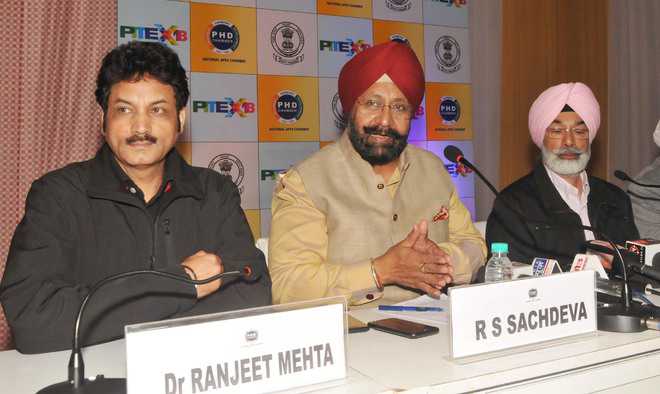 The Ministry of External Affairs (MEA) has turned down the state government’s proposal of inviting Pakistan to Punjab International Trade Expo (PITEX) scheduled to be held in the holy city from December 6 to 10.

“On the state government’s behalf, Vinni Mahajan, Additional Chief Secretary, Industries and Commerce, had written to the MEA for facilitating visa for Pakistani exhibitors for PITEX, but it flatly refused to consider it,” he said.

Sachdeva said PITEX was originally conceptualised keeping in view the bilateral trade between the two neighbouring countries. “Pakistan has been a regular participant for the past 10 years till 2015 along with other SAARC countries as the Chamber of Commerce and Industry of Lahore, Rawalpindi and Islamabad had evinced a keen interest in the event in the past. Pakistani cotton, embroidered fabric, leather goods, silver filigree footwear and onyx stone handicraft attracted maximum visitors to the exhibition,” he said.

For the past three years, Pakistan’s active participation was missing during this trade and cultural bonanza. “There used to be at least 45-50 exhibitors from Pakistan. Now, except for a few who possess SAARC visa, no direct visa is being granted by the MEA. We have five bookings from their side, but their actual participation would be known shortly,” Sachdeva said.

Meanwhile, countries like Thailand, Afghanistan, Turkey and Egypt have confirmed their participation. Similarly, traders from Jharkhand, J&K and Rajasthan are also participating in a big way in the event.

Deputy Commissioner KS Sangha said it would be for the first time that the MSME (Ministry of Micro, Small & Medium Enterprises) would conduct a conclave to talk about capacity building of small-scale industry to make them globally competitive.

Cabinet minister Rana Gurmit Sodhi would be the chief guest on December 7. The National Jute Board, PSIEC, GMADA, Punjab Agro Industry Corporation, PEDA, Milkfed and Markfed would also be part of the event.

Madhu Pillai, regional director, PHDCCI, said this time over 425 stalls would be set up over an area of 10,000 sq metres. “In 2005, PITEX was started with around 150 industrialists and merely 50,000 people had visited the exhibition. Now, we expect a footfall of over 2.5 lakh,” she said.

Meanwhile, a walkathon to promote organ donation, health talk on causes, symptoms, prevention and treatment of heart diseases and recent advances in joint replacement in association with Fortis Escorts would be organised.