SHIMLA: A media delegation from Assam on "Good Will Mission" called on the Chief Minister Jai Ram Thakur at his official residence Oak Over today. The delegation is on a week-long visit to Himachal Pradesh. 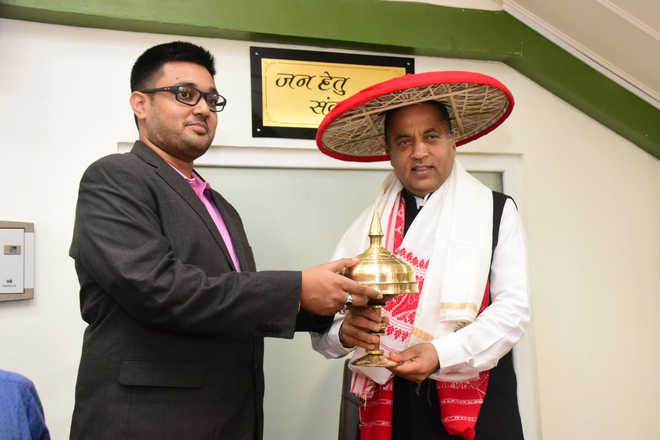 Chief Minister Jai Ram Thakur receives a memento from an Assam media team member at his official residence Oak Over, in Shimla on Tuesday. Tribune photo

A media delegation from Assam on "Good Will Mission" called on the Chief Minister Jai Ram Thakur at his official residence Oak Over today. The delegation is on a week-long visit to Himachal Pradesh.

Welcoming the delegation, the Chief Minister said that although a small state, Himachal Pradesh has emerged as a role model of development for big states of the country. He said the nature has blessed the state with varied climatic conditions, salubrious and pollution-free environment, besides enchanting scenic beauty making it a favoured destination for the tourists.

The delegation handed over a letter of the Chief Minister of Assam Sarbananda Sonowal to Jai Ram Thakur. The Chief Minister thanked his Assam counterpart and invited him to visit Himachal Pradesh.

Principal Secretary to the Chief Minister Sanjay Kundu gave a glimpse of Himachal Pradesh to the delegation. He said that the state was making rapid progress in every sphere of development under the leadership of Chief Minister Jai Ram Thakur.