PORT OF SPAIN:West Indies were 55/2 while chasing India&rsquo;s 279/7 when rain stopped play during the second ODI. 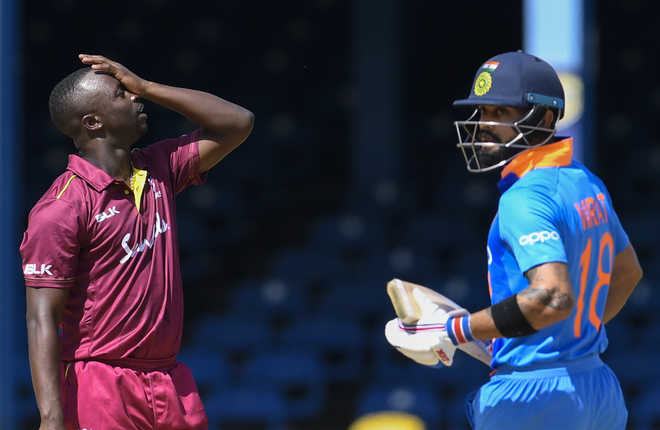 Kemar Roach expresses disappointment as Virat Kohli takes a run during the second ODI at Queens Park Oval in Port of Spain. AFP

Earlier, Virat Kohli led from the front with a fine century, his 42nd of the career, to guide India to 279/7.

Kohli played aggressively and scored 120 off 125 balls to guide India’s innings. He hit 14 boundaries and one six during his elegant knock. Besides Kohli, Shreyas Iyer (71 off 68) struck third half-century of his career and together with his skipper shared 125 runs for the fourth wicket to take India to a comfortable position. But it was far from rosy for India at the start as after opting to bat, they lost Shikhar Dhawan in the third ball of the innings, caught plumb in front of the wicket by Sheldon Cottrell.

Kohli in the company of Rohit Sharma (18) played fluently to stabilise the Indian innings. Kohli played some delightful shots through the covers and off his pads to register his 55th ODI fifty with an outside edge past West Indies wicketkeeper Shai Hope off Carlos Brathwaite (3/53) in the 15th over. But Rohit’s struggle finally came to an end when he sliced a Roston Chase delivery to Nicholas Pooran, who took a fine catch at point while running backwards. The duo shared 74 runs for the second wicket off 90 balls.

Rishabh Pant made 20 off 35 balls with the help of two boundaries before inexperience did him in.

Bogged down by 12 dots off 14 balls, Pant went for an ugly slog across the line over midwicket off Brathwaite only to find his timbers disturbed as India were reduced to 101/3.

Kohli and Iyer milked the West Indian bowlers to keep the scoreboard ticking. But hot and humid conditions got the better of Kohli in the 42nd over as the Indian skipper played a tired-looking shot only to be holed by Kemar Roach at long-off off Brathwaite. India could only manage 67 runs for the loss of four wickets in the last 10 overs. — PTI

Most ODI runs vs WI

In Tests, Sunil Gavaskar has the most runs against the West Indies (2749). In T20Is, Rohit Sharma leads the chart with 425 runs

No. of players to appear in 300 ODIs from each team

42 Centuries for Virat Kohli in ODIs. Overall, he has 67 tons in international cricket. As a captain he has hit 20 hundreds

11406 Runs by Virat Kohli take him past Sourav Ganguly (11,363) to become the eighth highest run-getter in ODIs

72.57 Kohli’s average against WI, the best among all batsmen with 1500-plus runs against a single opposition. He has five hundreds in his last 8 innings against West Indies

11 Innings without a century by Kohli in ODIs before this knock. He had played 9 innings in the World Cup in England without hitting a century. The last time he went more innings in a row without a ton was 13 innings in 2015