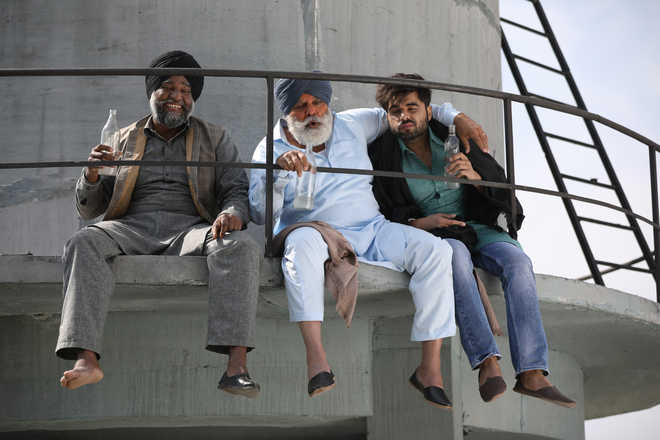 Undercover agents are relatively new for Pollywood. Unfortunately, despite Doorbeen, wherein an undercover DSP is sent to nab local bootleggers, they are still an uncharted territory for Punjabi cinema. For the film, as the trailer may have led you to (rather you too to) believe, is hardly a chase between Punjab Police and the locals of Velipura. Rather it’s a film that tries to pack it all, half-hearted action, half-felt romance and half-attempted comedy.

Save for the first scene wherein Rana Ranbir is perched atop a watchtower and cleverly informs the villagers (his iron bangle slides down a long rope and sets the microphone off) that makes the announcement of police official’s arriving vehicles in code language. But how?  “The government officials have arrived to give polio drops to your kids, kindly grab your children and run. Also, ensure that your neighbours also reach with their kids to the school. So, inform everyone around,’ so goes the announcement.

Which everyone in the village follows to the T, running helter-skelter but making sure not a single bottle of liquor is grabbed by the police. And so this has continued for the past 20 years.  The clever hiding spaces, the haystack, the liquor bottles and the beautiful villagescape are promising enough, but what should have been built upon, is rather left untended and suddenly we are transported to a few households, wherein Yograj Singh climbs the highest water tank there is in the village every time he is happy and high on homemade liquor.

Before that takes you to Dharmendra in Sholay atop a water tank, and also in inebriated condition, there is a little difference. And that comprises the dialogues, the script and the X-factor surrounding the cult classic. Making one of the village folks say, “You won’t get Basanti come down.” How much can a powerful actor like Yograj Singh save the script?

Anyway, the celebrations continue and so do the two parallel love stories, starring Ninja and Jass Bajwa. Lady loves, Wamiqa Gabbi and Jasmin Bajwa, appear to have followed the director’s briefs well.  Ninja, whom we last saw in High End Yaariyaan, could do with a slightly more promising role and slightly better performance. Jass Bajwa, as the DSP, in the garb of a village school teacher, has a meaty role but not even remotely a memorable character.  In his search for liquor, he is convinced of the harsh realities of life, forcing the villagers into illicit liquor, but we aren’t. Sometimes, when there aren’t many expectations, all a film needs to do is live up to its trailer.