Tripping on dining with cutlery!

IN the 1950s, it was compulsory for all boarders in our residential school in Tiruchy — run by British Jesuit priests — to use a spoon and fork while lunching or dining. Known for its high academic standards, perhaps the school wanted to project an elitist image. 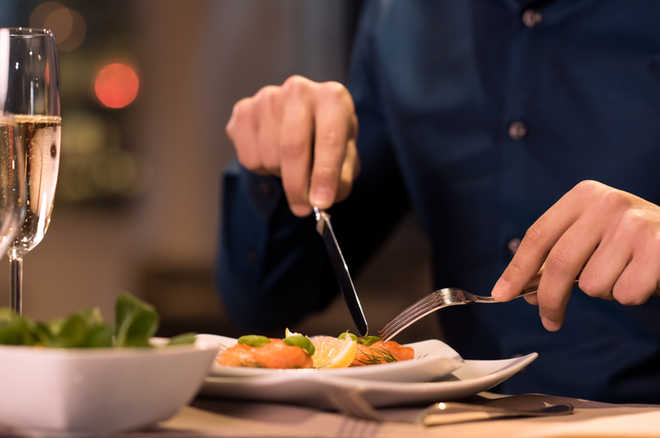 IN the 1950s, it was compulsory for all boarders in our residential school in Tiruchy — run by British Jesuit priests — to use a spoon and fork while lunching or dining. Known for its high academic standards, perhaps the school wanted to project an elitist image.

As a result, the sprawling dining hall often resonated with the persistent clatter of cutlery being wielded by clumsy, unskilled hands. The racket was reminiscent of a spinning mill working to full capacity. Boys being boys, we were more eager to wolf down our food rather than learn the niceties of Western dining. So, when Father Merrifield, the grumpy prefect, was not around, we often used our fingers on the sly.

Eating with a spoon and fork (mercifully, they didn’t insist on a knife as well!) denied one the exquisite pleasure of licking one’s fingers clean after a meal. It was the ultimate demonstration of supreme satisfaction but was sternly discouraged by the prefect. To ever-ravenous youngsters, who cared more for the food than the company at the table, such bad manners came easily enough. Another was using a fork as a toothpick — which made the prefect see red.

Anyway, we learnt painstakingly by trial and error — with a little practical, and sometimes sarcastic, guidance coming from the watchful prefect. ‘Don’t use your fork like a harpoon!’ he would snap waspishly. ‘You’re not spearing a walrus — all that’s needed is a gentle poke!’ Frustrated, several learners felt it would be far easier to eat with chopsticks!

Often a piece of meat or vegetable, when jabbed carelessly with a fork, would fly off a plate and blotch the shirt of the boarder sitting opposite, sometimes resulting in a row or even fisticuffs. Once when old Father Merrifield was benignly supervising dinner, an improperly impaled chunk of meat skidded off a plate and bespattered the front of his spotless white cassock. Undismayed and ever witty, he quipped, ‘That’s not fair — I’m too big a target!’

Initially, eating with a spoon and fork detracted much from the enjoyment of a meal. To us it was an imposition rather than a novelty. Spooning or forking food into one’s mouth was alien to most of us, accustomed as we were to using our fingers at home. Acquiring the required skill did take time and effort.

Yet, as George Bernard Shaw rightly observed, there’s no love sincerer than the love of food. So, left with no choice, we somehow learnt to use a spoon and fork acceptably, without messing up our clothes, the dining table or the high-strung prefect’s composure!