The small lodge where we were to stay in Kavaratti was simple and bare but cozy and equipped with basic amenities. 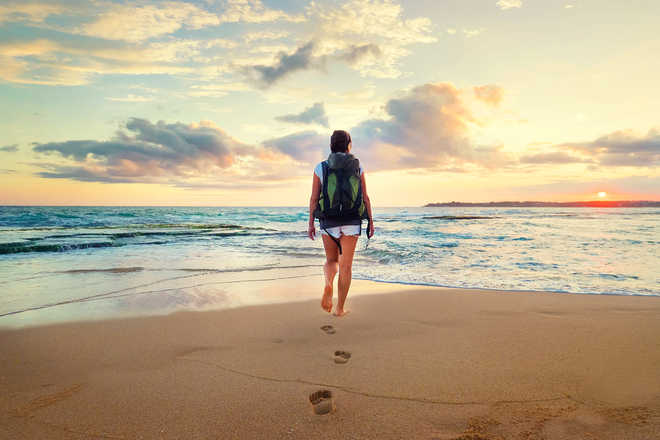 The small lodge where we were to stay in Kavaratti was simple and bare but cozy and equipped with basic amenities. As I was stepping in, the man at the door said something pointing towards my shoes. He was speaking Jeseri, the language of the Lakshadweep islands, but interpreting his gestures I understood that he was asking us to leave our shoes outside the lodge. It was logical, the beach sand would spoil the spic and span insides. But soon, we gathered that no shoes were allowed inside the lodge. Not now, not later. Shoes would stay parked outside the threshold. The thought of our branded shoes lying unguarded, virtually on the busy beach road, even at night, made us jittery. One of us had recently invested a fortune on branded footwear and actually took the trouble to check them at intervals! But more than that, we were irked at the idea of moving around sans our footwear, though there was a bathroom slipper, thanks to our urban conditioning!

Dismissing it to be a whim of the lodge owner, we were in for a surprise  to find out that we would have to face the agony of separation from our precious pairs. Everywhere we went — monuments, government offices, public libraries, departmental stores, art gallery, bank, ATMs, shops or private residences — we had to leave our footwear at the entrance. In a day, we had to go grudgingly through this drill at least 10-15 times. Those wearing shoes with intricate laces and buckles were the most inconvenient. The locals, we were quick to notice, used slippers and had the habit inculcated in them culturally.

Gradually, the ritual grew on us, too, as the touch of the floor brought a feeling of rootedness. It was healthy, our feet were breathing, instead of being trapped in sweaty, smelly synthetic enclosures for most part of the day.  It also gave a relaxed stance, no-hurry signal to the body. We became more mindful to the sights and our own sensations. The worry of our costly loafers and sneakers getting stolen vanished soon and we started enjoying our barefoot sojourns.

It reminded me that till recently this was the given thing in most of our households, too. It was a big no to bring footwear inside the puja room or the kitchen. Children played barefoot on dusty streets, irrespective of their social status, blissfully oblivious of health implications.

Entry to holy and auspicious places mandates that we leave our footwear outside. It is not an empty ritual, but is symbolic of getting stripped of arrogance, of materialism, of surrendering oneself in all vulnerabilities, to feel the humility inside and out.

Has the modern habit of wearing shoes all day long, even when not needed, subtly transformed our collective psyche?  Perhaps this is why we have lost touch with the ground reality.