BENGALURU: A massive controversy has rocked Karnataka after nearly 10,000 "fake" voter ID cards were seized from a flat in Rajrajeshwari Assembly seat, prompting the BJP to demand countermanding of the election claiming Congress was behind the racket, a charge dismissed by the latter as a "lie". 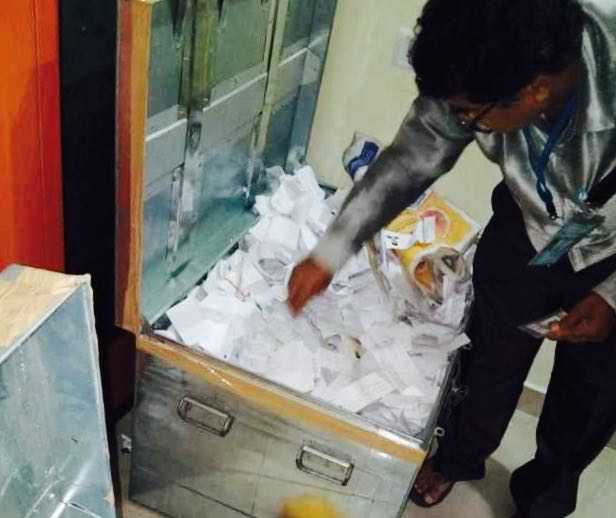 A massive controversy has rocked Karnataka after nearly 10,000 "fake" voter ID cards were seized from a flat in Rajrajeshwari Assembly seat, prompting the BJP to demand countermanding of the election claiming Congress was behind the racket, a charge dismissed by the latter as a "lie".

With just three days left before Karnataka goes to poll, the BJP and Congress, the two main contenders for power, went after each other's jugular, each claiming the flat belonged to a woman associated with the rival party.

Congress spokesman Rajdeep Singh Surjawala hit right back, alleging that the flat owner Manjula Nanjamari and Rakesh had BJP connections and both contested Bengaluru Municipal Corporation elections on the tickets of the saffron party.

Maintaining that prima facie the I-cards looked genuine, he said only a thorough inquiry will bring out the truth.

Replying to a question, he said the visiting cards with photos of a candidate were also found strewn around the flat but "no conclusion can be drawn that the candidate had visited the place".

"It was earlier suggested that somebody was trying to break into our (computer) system to prepare fake ID cards. That is not so," he said, adding it was for the Election Commission to take a decision on countermanding the election.

Prime Minister Narendra Modi, who was campaigning in Karnataka, attacked the Congress over adopting such tactics to win the election.

"Thousands of voter ID cards were seized, 1 lakh voters slips were seized in just one place. They must have planned such games in 40-50 constituencies. You (voters) be alert. Such sin cannot be allowed during the celebration of democracy (polls)," he told elections rallies.

Javadekar said thousands of fake cards with hologram, lamination machines, and computers were seized by police after BJP workers informed it about the racket.

"This is the philosophy of the Congress. If voters do not vote for you, create fake voters," he said, claiming a "fake voter ID printing factory" was being run in Manjula's flat. Manjula, he said, was once associated with the BJP but was now with the Congress, and demanded her immediate arrest.

He alleged she had campaigned for the sitting Congress MLA from the seat and its candidate for the current Assembly election Munirathna Naidu in the last polls.

The Congress hit back with a vengeance, claiming BJP was making such allegations because it was aware of its imminent defeat.

"They are making such allegations because of their imminent defeat, and after their workers and leaders were caught red-handed influencing voters in collating and collecting fake ID cards in order to influence the results of the elections," Surjewala told reporters.

He said the ID cards and equipment were not recovered from the flat by the police but BJP workers. The flat, he said, belonged to a BJP worker.

"Prakash Javadekar had the audacity to lie, mislead the people of Karnataka by saying Manjula does not belong to the BJP. She is a former BJP corporator and Rakesh also contested corporation election on BJP ticket in 2015," he said.

"Javadekar runs a factory of lies. Rakesh was a tenant of flat No. 115 and is mentioned in the list of BJP candidates who contested the corporation elections. Manjula is a former BJP corporator from Jalahalli," he said, citing newspaper reports.

While some TV news channels claimed Rakesh was Manjula's son, and others said she was his adoptive mother, the women at the centre of the controversy insisted they were relatives but had "no contact".

She told TV channels in Kannada, which was translated into English, that since she owned the land on which the apartment building stood, she had entered into a joint venture with a builder.

Manjula said she had rented or leased out the flats.

The flat under question was given on rent to a woman named Rekha Ranjan and not Rakesh for office-cum-residence.

When asked whether Rakesh was her son or adopted son, she said he was a nephew and that they had "no contact due to strain in family ties".

Javedakar, accusing the Congress of "telling lies loudly", said Manjula and Rakesh were "at loggerheads" and that he did not stay in her flat.

"The Congress ran an a fake I-Card issuance office there. This is what they are best at," he said.

Deputy leader of the Congress in the Rajya Sabha Anand Sharma said the entire episode was "stage-managed".

He claimed Manjula was associated with the BJP and her "son" Rakesh had contested the municipal corporation election on a BJP ticket.

"The Election Commission must take action, and a police case be registered," he told reporters in New Delhi, adding the BJP was up to such tactics as defeat was staring it in the face. PTI

"This is the BJP MLA candidate Muniraj Gowda with BJP leader Rakesh, in whose flat the voter IDs were recovered.

Bengaluru: #Visuals from Flat No. 115 at SLV Park View Apartment in Jalahalli area from where 9,746 voter ID cards were found. #KarnatakaElections2018 pic.twitter.com/Hi7t1RUOeB