HOUSTON:"Howdy, Modi!", the community event to be addressed by Prime Minister Narendra Modi here next month has been sold out with over 50,000 people registering for the programme, the organisers said. 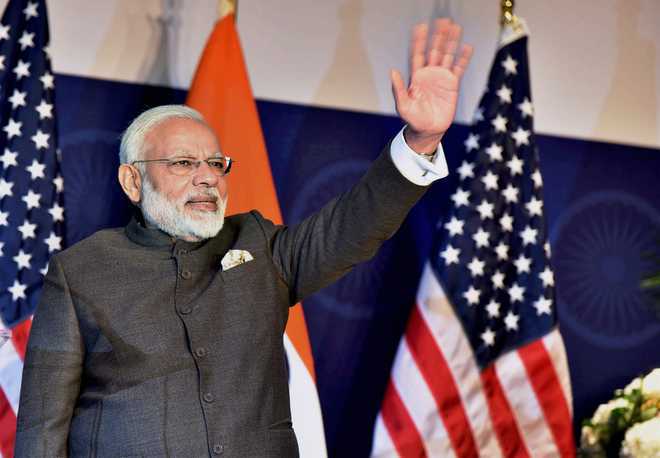 Prime Minister Modi is scheduled to visit the US next month to attend the United Nations General Assembly on September 27. PTI

"Howdy, Modi!", the community event to be addressed by Prime Minister Narendra Modi here next month has been sold out with over 50,000 people registering for the programme, the organisers said.

"Howdy", short for 'How do you do?', is a friendly greeting commonly used in southwestern United States.

Over 50,000 supporters have already registered for the mega community summit in September at the NRG Stadium, the host Texas India Forum (TIF), a Houston-based non-profit body, said.

The live audience will be the largest ever for an Indian Prime Minister in North America and also the largest for a foreign leader in the US other than Pope Francis.

Potential attendees can still register for the free event. However, new registrants will be on a waiting list. Registration for the university students is open until August 29th as part of a special allotment, they said.

Prime Minister Modi is scheduled to visit the US next month to attend the United Nations General Assembly on September 27, prior to which he will travel to Houston to meet the leading businesses, political and community leaders here in Houston, the fourth largest city with a population of over 130,000 Indian-Americans.

The summit, with the tagline of  'Shared Dreams, Bright Futures' will highlight the contributions of Indian-Americans to enrich the American life as well as the key role it has played in strengthening relations between the two nations.

"On behalf of the hundreds of thousands of Indian-Americans in Texas, and as co-chair of the Senate India Caucus, I welcome Prime Minister Modi to Houston," said US Senator John Cornyn.

Houston, which has one of the largest concentration of over 5,00,000 Indian-American community in the US, is the energy capital of the world. Energy security is a priority area for the prime minister.

"India continues to be a key security and economic partner of the United States, and I look forward to seeing that relationship strengthen with his visit to Texas," Cornym said.

The event reflects strong community involvement, with the engagement of more than 1,000 volunteers and 650 Welcome Partner organisations.

The event will also highlight on growing trade between India and Houston, they said.

In 2019 to date, India is Houston's fourth largest trading partner, just behind Brazil, China and Mexico. From 2009 to 2018, trade between Houston and India averaged USD 4.8 billion annually and was valued at USD 7.2 billion in 2018.

The audience will have the chance to hear Modi's vision for India and the US-India partnership. The address will have simultaneous English translation available via smartphone, the organisers said.

It will be broadcast live online and on television channels reaching over 1 billion people across the US and India.

A cultural programme, that will feature a mix of artists from Houston and elsewhere in Texas will be held. It will not feature any performers from India, as TIF has insisted on showcasing the wealth of talent within the Indian-American community.

"The cultural programme will provide a unique view on the Indian-American experience, and promises to showcase the diversity of our community while being an engaging and entertaining performance, said Jugal Malani, chair of the "Howdy, Modi!" organising committee.

"Houston is one of the most diverse cities in America and has many advantages including a central location and access to global trade routes, a trained and talented workforce, and a business-friendly regulatory environment, making this region an ideal partner for business and commerce," said Bhavesh (Bob) Patel, CEO of LyondellBasell.

This will be Modi's third major address to the Indian-American community after he became the prime minister in 2014 and the first after his re-election in May.

The previous two were at the Madison Square Garden in New York in 2014 and the Silicon Valley in 2016. Both the events were attended by more than 20,000 people. - PTI