NEW DELHI: Some 450 students of Rani Jhansi Sarvodaya Kanya Vidyalaya were admitted to four different hospitals on Saturday after they fell ill due to gas leakage from a depot in southeast Delhi''s Tughlakabad area. 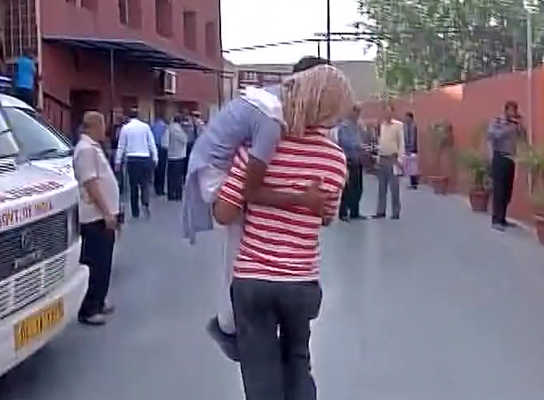 Students complained of irritation in eyes and throat. —ANI

Some 450 students of Rani Jhansi Sarvodaya Kanya Vidyalaya were admitted to four different hospitals on Saturday after they fell ill due to gas leakage from a depot in southeast Delhi's Tughlakabad area.

The depot is located near a school in Railway Colony, Tughlakabad.

Most students were discharged in a few hours, although four of them were kept under observation in the Intensive Care Unit of two hospitals.

A call was received around 7 am about the gas leakage and seven fire-tenders were rushed to the spot, said a senior officer from the Delhi Fire Services, adding that the source of leakage was not clear.

South East Delhi DCP Romil Banniya said, “Some chemical leakage at customs area of Tughlaqabad depot has caused irritation in eye to around 50 girl student studying at the school and they have been admitted to a hospital".

School vice-principal said, "Some students complained of irritation in eyes and throat due to gas leak, following which they were admitted to the hospital."

Meanwhile, the Delhi government has ordered a magisterial probe into the incident.

Lt Governor Anil Baijal and Opposition Leader in Delhi Assembly Vijender Gupta visited the victims at ESI Hospital and enquired about their condition.

Hitting out at the Delhi government, Gupta sought a high-level probe into the incident.

The chairperson of the Delhi Commission for Women (DCW), Swati Maliwal, met the children admitted in the Batra hospital and demanded shifting of the container depot.

"V (sic) sad. It is a man made disaster as no need for Container Depot to be in centre of Delhi. Shud b imm (sic) shifted, accountability fixed for gas leak," she tweeted. (With PTI inputs)