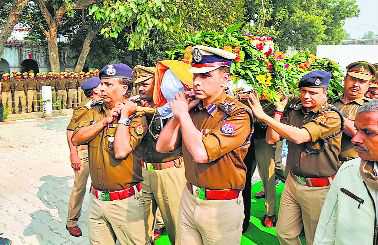 A mob fought pitched battles with the police in Siyana area of Bulandshahr, apparently after right-wing activists were angered by the discovery of cow remains strewn in nearby fields. Dozens of vehicles were torched and gunshots fired at the police, prompting retaliation. In the violence, Inspector Singh and 20-year-old Sumit Kumar,  who was a part of the mob, were killed.

According to the police, seven persons have been booked for the alleged cow slaughter, while another case has been slapped against 87 persons, of whom 27 have been named, for murder and damage to public property.

ADG Intelligence SB Shirodkar, who is heading a probe, is expected to submit  his report within 48 hours. He refused to reveal any preliminary findings, saying he

would submit his report to the state government tomorrow evening. ADG (Law and Order) Anand Kumar said four persons had been arrested and several detained for interrogation.

The arrests came after the second FIR was filed by the colleague of the slain SO and Siyana police station Sub-Inspector Subhash Singh.

Kumar said on the basis of video footage of the incident, six police teams were carrying out raids to arrest the other accused, including Yogesh Raj. Soon after the reported discovery of cow remains in the fields of former gram pradhan in Mahav village Raj Kumar, Yogesh Raj had got an FIR registered, naming five persons, all members of a local masjid committee.

Preliminary investigations, however, suggest none of those named in the FIR were present in the village as they were participating in a three-day religious congregation around 50 km away in Bulandshahr, where 25 lakh persons had gathered.

Meanwhile, the slain police officer was cremated with full honour at his ancestral village in Etah. The cremation was delayed as villagers and relatives demanded Chief Minister Yogi Aditynath’s presence.

His elder son Shrey lit the pyre. Speaking to reporters, Singh’s second son said his father had been martyred while preventing Hindu-Muslim violence.

According to the Siyana Nagar Palika chairperson Rais Malik, it was a conspiracy to foment trouble on the last day of the congregation. A mob led by Yogesh Raj carried the cow remains in a tractor-trolley and blocked the Bulandshahr-Garh road used by people returning from the congregation, he claimed.

“The police officer did not allow the blockade, as a result of which he was targeted,” claimed Malik. The theory has been confirmed by the ADG (Law and Order).

It was yet to be established whether Sumit died from a police bullet or one fired by the mob, said the police. The Bulandshahr police have urged people to refrain from spreading false news, adding the religious congregation was not linked to the violence.

NHRC notice to UP, DGP

New Delhi: The National Human Rights Commission (NHRC) has  sent notices to the UP Government and the state police chief over the Bulandshahr deaths. “The NHRC has taken suo motu cognisance of media reports and issued notices to the UP Chief Secretary and the DGP, seeking a detailed report, including action taken against the miscreants in connection with the incident,” said a senior official of the rights panel. PTI