PATNA/MUZAFFARPUR: Four children died in Muzaffarpur district on Saturday due to hypoglycemia, taking the number of such deaths to 67 this month, officials said. 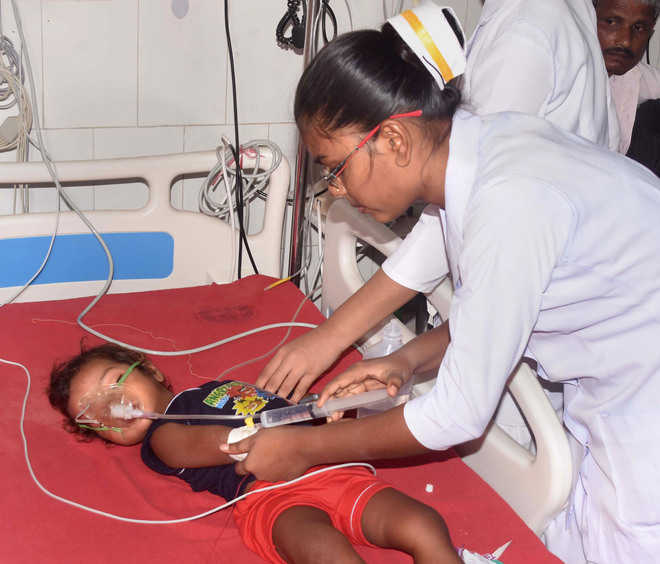 AES SCARE: A child being injected at a hospital in Muzaffarpur. PTI

Four children died in Muzaffarpur district on Saturday due to hypoglycemia, taking the number of such deaths to 67 this month, officials said.

All the victims, most of whom are below the age of 10, have fallen prey to hypoglycemia, a condition caused by a very low level of blood sugar and electrolyte imbalance, they said.

The 67 children died in two hospitals here—the state-run Sri Krishna Medical College and Hospital (SKMCH) and the Kejriwal Hospital, which is run by a trust.

According to a release by the Muzaffarpur district administration, the four children died at SKMCH on Saturday.

Since June 1, 197 children have been admitted to SKMCH while 91 were admitted to Kejriwal Hospital with suspected acute encephalitis syndrome (AES), but most of them were found to be victims of hypoglycemia.

The condition of six children undergoing treatment at each of the two hospitals is stated to be serious.

Meanwhile, Union minister and Bihar BJP chief Nityanand Rai went straight to Muzaffarpur from Patna airport, cancelling all felicitation programmes. He expressed concern over the children’s deaths, and said the party will not organise any programme to welcome anyone for two weeks. — PTI