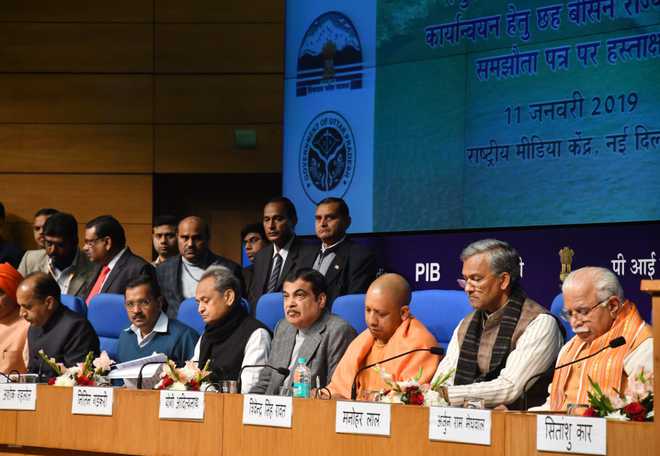 Three projects are proposed to be constructed on the Yamuna and two of its tributaries, Tons and Giri, in the hilly regions of Uttarakhand and Himachal Pradesh of the Upper Yamuna Basin.

These include Lakhwar project on the Yamuna in Uttarakhand, Kisau on the Tons in Uttarakhand and Himachal, and Renukaji on the Giri in Himachal.

The states had already signed an agreement in respect of sharing of cost and benefits of Lakhwar project in August 2018.

After signing the agreement, Gadkari said an agreement among the states concerned regarding the Kisau project would be reached soon.

Renukaji Dam project has been conceived as a storage project on the Giri river (tributary of the Yamuna) in Sirmour district of Himachal. It envisages construction if 148 m-high rock-filled dam for supply of 23 cumec water to Delhi and other basin states.

The project will also generate 40 MW of power during peak flow. It is proposed to be executed by Himachal Pradesh Power Corporation Ltd (HPPCL). The live storage of Renukaji project is 0.404 MAF and total submergence area is about 1,508 hectares in the territory of Himachal.

“After construction of the project, the flow of the Giri will increase about 110 per cent which will meet the drinking water needs of Delhi and the other Yamuna basin states up to some extent in the lean period,” Gadkari said.

Stored water of Renukaji Dam will be used by the signatory states. The share of water among the states will be: Haryana-47.8 per cent; Uttar Pradesh/Uttarakhand-33.65 per cent; Himachal-3.15 per cent; Rajasthan-9.3 per cent and NCT of Delhi: 6.04 per cent.