MUMBAI:The Maharashtra Assembly elections held on Monday saw a turnout of around 63 per cent, almost matching the 63.38 per cent polling recorded in the the last state elections in 2014. 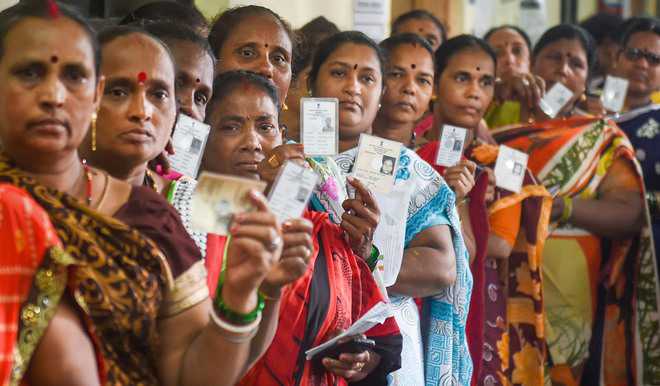 Women show their voter identity cards as they wait to cast their votes at a Mumbai polling station on Monday. PTI

The Maharashtra Assembly elections held on Monday saw a turnout of around 63 per cent, almost matching the 63.38 per cent polling recorded in the the last state elections in 2014.

Rural areas of the state fared better, with voters there showing more enthusiasm than their urban counterparts. Polling began at 7 am and ended at 6 pm. Altogether 54.53 per cent voters exercised their franchise till 5 pm, a poll official said.

A nonagenarian was the cynosure of all eyes as he accompanied Union minister Smriti Irani outside a polling booth in Mumbai. “Today’s hero is Khanna saheb, who served in the Army. At 93, he came out to vote. It is an inspiration,” Irani said.

In Pune, A 102-year-old man, suffering from a heart ailment, went straight to a polling booth to cast his vote after being discharged from a hospital. Ibrahim Alim Joad, who, according to his family, has never missed voting since Independence, consulted his doctors before going to vote.

The Congress said it filed over 250 complaints of poll procedure violations with the EC, including one for Ramtek segment where it said if the EVM button was pressed in favour of Congress candidate, the vote was shown to be going to the BJP nominee. — PTI

The polling was disrupted in various parts of Maharashtra after EVMs developed glitches. “We have received reports of the EVMs and VVPAT machines malfunctioning in Mumbai, Satara, Wardha, Aurangabad, Ratnagiri, Bhandara and Sangli,” said an EC official. The EVMs being used in the polls are upgraded and linked to the VVPAT machines.  The Congress  has complained of 187 instances of the EVMs malfunctioning in various parts of the state.TNS