After Kamlesh Tiwari’s murder, I fear for my life: Sadhvi Prachi

MEERUT: After claiming to be under threat from jihadi groups, firebrand Hindu leader Sadhvi Prachi on Wednesday said that western Uttar Pradesh has turned into a mini-Pakistan. 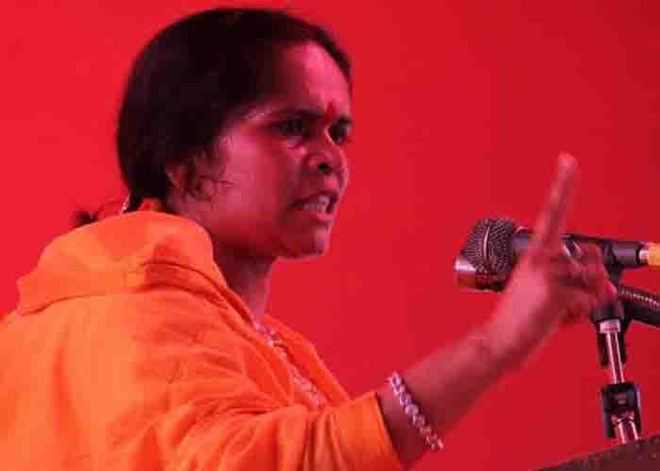 After claiming to be under threat from jihadi groups, firebrand Hindu leader Sadhvi Prachi on Wednesday said that western Uttar Pradesh has turned into a mini-Pakistan.

She said Prime Minister Narendra Modi's next aim after the revocation of Article 370 from Jammu and Kashmir, should be to deal firmly with those who issue fatwas.

"Till now I used to fearlessly move around the country but after the murder of Kamlesh Tiwari in Lucknow and Mukesh Sharma in Meerut, I feel apprehensive," she told reporters.

She further said that Tiwari had given a statement in response to the statement made by a leader in Rampur and has paid for it with his life.

Tiwari was brutally murdered in Lucknow on October 18 in his house. Autopsy revealed on Wednesday, the Hindu Samaj Party leader was stabbed 15 times and shot in the face. The two assailants who entered his premises under the pretext of wishing to join his party, also tried to slit his throat.

Prachi, after the murder of Tiwari had claimed to be facing threat to her life. She said that Tiwari's killing was the doing of Jihadis (Islamic militants).

Speaking to reporters in Haridwar on Sunday, she asked Union Home Minister Amit Shah and the governments of Uttarakhand and Uttar Pradesh to provide her security.

Prachi was in Rampur on Wednesday to meet the family of Mukesh Sharma, a lawyer who was shot dead in Meerut on the same day as Tiwari.

Sharma, a senior member of the Meerut Bar Association, was shot dead by unidentified assailants here late on Friday. He was also an office bearer of the Brahmin Sabha.

The assailants fled after the incident and Mukesh Sharma, was rushed to the Anand Hospital, where the doctors declared him brought dead.

His daughters have alleged that the murder was planned because all shops in the village usually remain open till midnight but on that day, all shops had closed at 8.p.m, an hour before Sharma was shot dead in his Kamalpur village.

On Sunday, after the two murders, Prachi said: "I have received threats from the ISIS on several occasions. I believe firmly in God and have not discussed this till now. But the murder of Kamlesh Tiwari has upset me. A few days ago, some unknown persons came to my ashram and made inquiries about me. I feel that I need security."  IANS