NEW DELHI:PM Narendra Modi today made an impassioned plea for 50 days’ cooperation in his attempt to make India corruption-free. However, his speech failed to impress the Opposition. 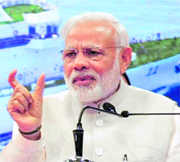 "People have high expectations. I just want my honest citizens to stay patient for 50 days. This is part of a series of steps to end corruption and black money. Punish me if I don’t deliver." Narendra Modi, Prime Minister

Prime Minister Narendra Modi today made an impassioned plea for 50 days’ cooperation in his attempt to make India corruption-free.

Empathising with the “honest” common people on hardships they were facing following his demonetisation move, he almost choked up while talking about the “sacrifices” he made for the country.

However, his emotionally surcharged speech and stern warnings to the “corrupt” at Goa and Belgaum failed to impress the Opposition.

Taking on the Congress directly, Modi said: “I know what kind of powers I have taken on. I know the kind of people who will be against me now. I am looting what they had accumulated over 70 years.”

He also warned of more action against the corrupt, including those holding “benami” money and property. “I have more projects in mind to make India corruption-free. Cooperate with me and help me for 50 days and I will give you the India you desired,” the PM said in Goa.

In Belgaum, he said his “government would not spare the guilty. There is pain but what is more important is the gain for the country”.

The PM’s primary aim was to reach out to people and assuage some of the growing impatience due to the fallout of his decision to demonetise Rs 500 and Rs 1,000 notes. “Yes, I also feel the pain. These steps taken were not a display of arrogance. I have seen poverty and understand people’s problems. I was not born to sit on a chair of high office,” he said.

“Whatever I had, my family, my home... I left all of it for the nation,” he said, choking up. “I know they are against me. They may not let me live. They may finish me because their loot of 70 years is in trouble. But I am prepared,” he declared.

The Ministry of Finance also advised banks to increase the Business Correspondents’ limit to Rs 2,500 for withdrawal from accounts.

Banks have been advised to make arrangements for separate queues for senior citizens and Divyang persons. The last date of submission of annual life certificate for government pensioners has also been extended to January 15, 2017 instead of November-end.

Separate queues will also be arranged for exchange of cash-to-cash transactions.

Banks have been advised to increase the issuance of mobile wallets and debit or credit cards as also to provide them to those not having access. On reports that  hospitals, caterers, tent houses and others are not accepting cheques, demand drafts or online payment, the government advised the people to complain to the District Magistrate or authorities concerned in this regard. — TNS

US Embassy said such requests would not be entertained throu...