NEW DELHI: The Cabinet today moved to prohibit all forms of child labour below the age of 14 years making exceptions for children helping families or working in family-based enterprises after school hours and during holidays and for children employed in the entertainment industry and sports barring circus. 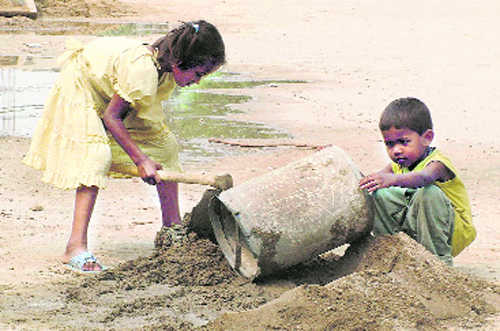 The Cabinet has allowed children under 14 years to work in non-hazardous occupations after school and during holidays. Mukesh Aggarwal

The Cabinet today moved to prohibit all forms of child labour below the age of 14 years making exceptions for children helping families or working in family-based enterprises after school hours and during holidays and for children employed in the entertainment industry and sports barring circus.

Child activists slammed the amendments saying majority children were working in home-based occupations in India and the government, by making exceptions, had excluded a vast section of child labour from protection. As per 2011 Census, India has 12.6 million working children.

Another amendment the Cabinet allowed today to the existing Child Labour (Prohibition and Regulation) Amendment Bill 2012 is banning employment of adolescents (14 to 18 year olds) in hazardous occupations which have been separately defined. Further, penalties for employing children in violation of the law stand doubled.

The current legislation prohibits child labour below 14 years in 18 listed hazardous occupations and 65 hazardous procedures. It allows employment of 14 to 18 year olds.

Cabinet amendments were needed because the Right to Education Act 2009 mandates free and compulsory elementary education for 6 to 14 year olds and if the children under 14 years are allowed to work they can’t be at school.

“The RTE Act says all six to 14 year olds must be in school but the child labour law allows children under 14 to work in non-hazardous occupations. Today’s amendments, once passed by Parliament, will bring harmony of purpose between the two legislations. No child under 14 years can be employed except if he is helping his family or working in a family enterprise like agriculture and artisanship after school and during holidays or if he works for TV, etc,” said a government source. Although the government defended allowing home-based work for children citing “social realities”, child activists rejected the amendments as "regressive".

"Most children work in family enterprises such as agarbatti making; agriculture, carpet weaving, etc …You have excluded all of them and diluted your commitment to banning child labour”, said Bharti Ali of HAQ Centre of Child Rights.