Chinook delivery to start in Feb

CHANDIGARH: American defence major Boeing is expected to commence the delivery of CH-47 Chinook heavy-lift helicopter to the Indian Air Force in February next year, it is learnt. 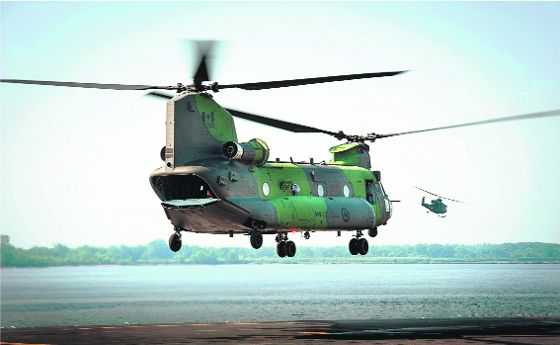 American defence major Boeing is expected to commence the delivery of CH-47 Chinook heavy-lift helicopter to the Indian Air Force in February next year, it is learnt.

“The helicopters would be shipped to India in a partially disassembled state and would be off-loaded at Okhla port in Gujarat,” an IAF officer said. The Americans are setting up facilities near Okhla to re-assemble and test-fly the helicopters before being handed over to the IAF, he added.

After acceptance trials, the helicopters will be flown to Chandigarh, which would be their permanent base. Two hangars and a maintenance bay along with associated technical and logistics facilities are to be set up here for the purpose.

India had signed a deal with the US in September 2015 for 15 Chinook helicopters, with an option for another four machines, and 22 AH-64 Apache attack helicopters that would be based elsewhere.

“The fact that the new machines are arriving by sea indicates that the entire fleet would be delivered in one or two consignments,” an officer said. “The other option was to have the choppers airlifted in heavy freighters like the AN-124, which would have taken multiple sorties spread over days or weeks,” he added. The first Chinook airframe manufactured for the IAF made its inaugural flight in the US in July this year. Last month, a team of IAF personnel comprising four pilots and four engineers proceeded to Delaware in the US for conversion training on Chinooks.

Chinooks have a payload capacity of about 10 tonne and will provide much-needed fillip to the IAF heavy-lift capability, a role earlier being fulfilled by Soviet origin Mi-26s, also based at Chandigarh. The IAF had four Mi-26, but now is left with just one serviceable machine. Chinooks will lift artillery, vehicles, road construction and engineer equipment as well as troops and supplies to mountainous sectors in North and North-East.

Chandigarh is no stranger to Chinook. Three of them belonging to British Royal Air Force had been airlifted here from the UK for onward journey to Nepal for flood relief operations in 2015. After being re-assembled and test-flown, these spent a few days here before being recalled home.